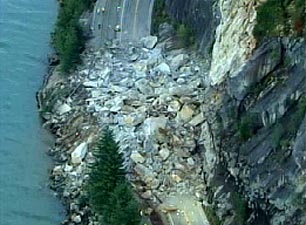 Luckily, there's still time until Friday to clean it up. Had it happened on departure day, there'd be over 400 flights to reschedule. Good times.

Update: The story of Mozilla being trapped seems to get a little press feedback: On ZDNET, for example, and the local press wants to cover our experience as well.

Update 2: The highway is to reopen today (Saturday) night, they say.

Update on the unlucky rock slide story: Apparently it's going to be closed for five days, meaning we have to leave much earlier in order to take an alternative route to Vancouver.

I can't exactly say I am looking forward to spending 7 instead of 3 hours in the bus :( At least I am not flying back straight to Pittsburgh on Friday, so at least it won't be followed by another 8 hours or so of traveling.

Update: My bus was rescheduled to 3 am in the morning. Looks like I'm not going to go to bed that night and just sleep on the bus.

Update 2: Thank heaven somebody filed a bug on this: Can't get out of Whistler -- can't be long until this gets fixed!

"The smoking bans in the German states of Baden-Württemberg and Berlin violate the constitution. However, the laws stay valid until the end of 2009, by when the parliaments have to pass new laws."

Seen on tagesschau.de (German). Crazy. Baden-Württemberg happens to be the state I live in.

It seems, the laws violate the rights of owners of very small bars. Why? Because owners of bigger bars are allowed to designate special areas to smokers; in smaller bars, that's impossible, leading to a significant disadvantage for these bars. As people won't have a way to smoke there, they'll move on to bigger bars instead, violating the constitutionally guaranteed freedom of profession.

Apparently, while only the anti-smoking laws of two states were in question here, this is a big signal for the other 14 states as well, as most of them have almost identical laws in place.

We'll see how the state governments react to that. If I had to guess, I'd say they'll allow bar owners under a specific square meter size of the establishment to choose whether or not they want to be a smoking or non-smoking venues.

Well, greetings from Whistler, BC! It's raining, but sessions have started so we don't really hang out too much outside at the moment anyway. And while meals are outside, they are luckily in a tent. Phew.

Of course at lunch, I was stirring the salad dressing and promptly a round piece of glass at the bottom of the jar broke out and decided to flood my pants with what I believe was yummy while still in the jar. Always good to have a pair of spare pants.

I added some pictures to ipernity already, so go over there if you'd like to see what I took pictures of. I also wrote some code to import ipernity into summit.mozilla.org, where I hope it'll show up soon. 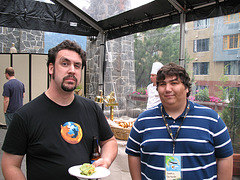 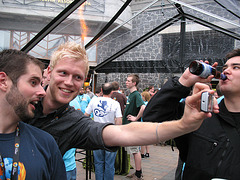 Yay, I am out and about for the Mozilla Summit 2008 in the beautiful Whistler, British Columbia, Canada.

It's going to be an exciting week with a lot of people I know and haven't seen in a long time, and there will be many new people to meet as well. I am looking forward to it!

Whistler itself is a breathtaking place, they say, so I am particularly thrilled that such a great place was picked for the event. I know at least one of my friends is jealous because he'd love to go mountain-biking there!

If you want to see what's going on at the Mozilla Summit, hop on over to summit.mozilla.org, a new mash-up site showing tons of media related to the summit. Soon it'll look much fuller than this:

I'll write again when I'm there :)

Just recently I ranted about how bad it is that GMail auto-adds every possible email address it can get its hands on to your contacts, making them utterly cluttered with the most random people on the planet, including "remove me from this mailinglist" addresses and others you never want to see again.

It seems as if Google heard me (and many others): They now introduced a new section "suggested contacts" that they dump everybody and their brother's email address into, but the people you actually want to have as contacts stay in an also newly created "My Contacts" folder.

This gives you the convenience of still adding people you email to the auto-complete feature (which, in and by itself is not so bad), while not hopelessly cluttering your contacts. Exactly what I want!

Well, thank you, Google. Read more about it on the GMail blog.

So, Wordpress on the iPhone is pretty cool. Obviously, typing an entire blog post on there can become tedious, but if you just want to tell the world about something that happened to you five seconds ago, it's definitely a must-have.