Over at AppleInsider, they have a bunch of photos comparing the new 15-inch Macbook Pro with the now "old" design: 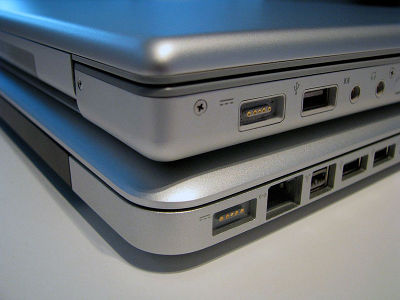 My thoughts: The new MacBook Pros are a really worth thinking about. From their overall look, they seem to be better designed, and a few annoyances have been taken care of, such as the old MBP's plastic rim, or the hard drive (failure part number one in computers, seriously) that was hidden way on the inside of the box.

Along with that, since I bought my first-generation one, the processor speed (mine still has an Intel Core Duo CPU), and now also graphics power have increased significantly. All the new "bling" in Mac OS X Leopard and many new and fancy applications demand a lot from a laptop, which mine--in spite of plenty of RAM--sometimes can't fulfill.

Bottom line: I am considering retiring my laptop "Chronos" some time next year as my primary, every-day tool, in favor of one of its younger siblings, with much more "bang" to tackle the work to come.

I also looked at the smaller MacBooks, and while I like that they moved closer to the MBP (being aluminum and all), the missing FireWire, ExpressCard, and the shared-memory graphics made me forget about that pretty fast.