Zooomr, a "web 2.0" website for photos, is in my opinion the most promising flickr competitor around. It shares a lot of features with its well-known big brother that was bought by yahoo a while ago.

As I found out today, since a few months, Zooomr is still handing out "pro" accounts for bloggers that are free for one year. So today I upgraded my free zooomr account, uploading my first high-resolution picture to the service and blogging it in my German blog:

My first impression of Zooomr is that it works very flawlessly and is by all means worth a thought when you decide where to host your photos. While I have set up an instance of Gallery 2 for my own photos, I always had the problem that I needed to scale them down to, say, 800x600 pixels. Otherwise every single photo would eat up around 2 megabytes-or-so of my personal web space, eventually filling up space needed for the actual websites etc.

Also, modern photo sharing sites come with a lot of nice features like RSS feeds, tags etc.; through their photo sharing capabilities, they are much easier to integrate into blogs or other web applications than classic photo tools.

Therefore I will give zooomr a shot for a while now, and eventually I will decide if I want to put all my photos on there or not. A big part of my decision will obviously be how much they want to charge me after the free year. Flickr takes 25 Dollars per year which, while it is not a lot, has kept me from signing up there so far, because I was unsure if I would use it enough to justify the (long-term) investment.

A week ago, the Firefox crop circle (finally) made it into Google Earth. This is a screenshot of how it looks like: Now, as Asa found out, today the photos also made it into Google Maps: (thanks to bagawk on #osu-lug for the Google Earth screenshot; thanks to Asa for the link to the Google Maps location!)

Since my daily blog reading is more than you would want to visit "by hand", I use a news reader. For a long time I used the online newsreader Bloglines, but recently (after a kind recommendation by Jean Pierre) I switched to Vienna.

The effect is the same: The software gladly collects any changes to publishers' RSS feeds and stores/caches them locally for me to read.

Every once in a while you get articles twice, mainly because an author changed something shortly after they hit the "publish" button. This happened on bloglines a lot, apparently because blog software already pings update services and bloglines seemed to pull the respective feed immediately.

The BBC frequently pushes headlines out that it reviews minutes later, sometimes it's just horribly wrong English, sometimes it gives you a wrong impression of what was happening.

But then, seconds later, the writer decides to replace the headline in question by a less horrifying

I wonder... - in the internet century, don't people think twice before publishing anymore?

A big "oops" probably went through the slashdot office when the hit the limit of 16,777,216 comments in their system which used an unsigned mediumint as the ID type in their mysql database.

We shall flog ourselves accordingly -- the slashdot people themselves

Or, to say it with the words of the first commenter (after the issue was solved...):

So, a few minutes ago, the Google GMail interface changed (again ;)) and has become even more "ajaxy": 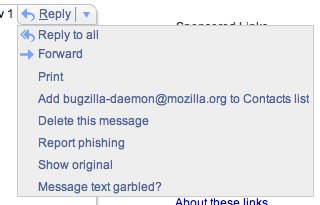 The common operations are now a dropdown list in the upper right corner of the displayed message, for example.

So far, I like it. What do you guys think?