I just watched the pilot episode of Pioneer One, the "first ever made-for-torrent" TV series, and I liked it a lot! 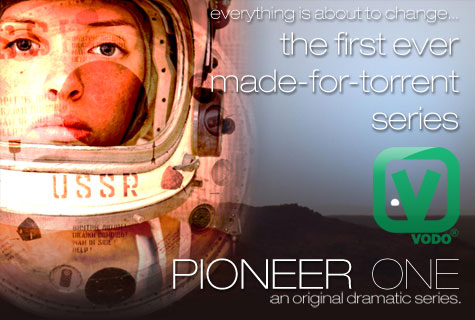 The story is intriguing:

An object in the sky spreads radiation over North America. Fearing terrorism, U.S. Homeland Security agents are dispatched to investigate and contain the damage. What they discover will have implications for the entire world.

The pilot episode has been filmed on a budget of a mere 6000 dollars (all of it funded by private donations), and for that, the idea has been very well executed. I suggest you all see it, as the video is freely and legally available through VODO. Pioneer One is licensed under a Creative Commons Attribution Noncommercial Sharealike license.

What I find very impressive about the show is that unlike traditional producers, they embrace rather than demonize P2P file sharing. Therefore, the makers of Pioneer One have the chance to show that grassroots film-making (or rather, TV-series-making) that is successful beyond a tiny scale is possible by actively engaging the Internet community (for both funding and distribution) rather than using the Internet as a simple, tightly controlled broadcasting medium as if it was a glorified TV set.

When the article on Pioneer One faced (and fenced off) a deletion request due to alleged irrelevance on Wikipedia, I wrote the following in the deletion discussion:

Keep. Not for it being a low-funds TV series, as it is not exceptional in that respect, but for its attempt at being successful through Torrent distribution. [...] The main reason for its notability is that we see a huge effort on the side of traditional media distribution groups against P2P networking as a concept. They essentially argue that P2P is [not] tightly controllable and therefore it must be objectionable. Making an active effort to legally distribute media content via P2P is much more a political statement for the legitimacy of P2P as a cultural phenomenon than it is a way to keep distribution cost low. Compare this to other attempts at making a (mini-) series popular on the Internet (Dr. Horrible, for example) that while being free-as-in-beer (initially) did not use P2P technology (or any free-as-in-speech distribution channel), and you'll see how radically different Pioneer One is in that respect. [...]

So, you have a bunch of .avi video files (from your cell phone, for example) that you'd like to combine into one (so you can upload the collection to YouTube)?

Here are two options on how to do this. The first one uses a tool from the transcode package:

avimerge is appropriately named, and if it works, it works well. Sometimes, however, it produces out-of-sync audio, which is kind of lame if people are actually, you know, talking in your videos.

Second method to the rescue: mencoder is part of the MPlayer family and can also concatenate avi files:

Note: Both methods are lossless, as neither the video nor audio stream is re-encoded in any way, but they also require all input files to use the same stream formats. If you took the different videos with the same device though, that shouldn't be a problem. In this German video, Susi Neunmalklug (Susie Smartypants) explains the evolution to Mr. Hempelmann (who apparently is her religion teacher).

It is a promotional video for a new German children's book about the evolution.

(thanks for the link, Zach!)

We all know that President Obama's internet team is undoubtedly the most advanced a US government ever had (and one could argue, even in the world). Now, we can't exactly say the same for his VP Joe Biden:

Hat tip to Joe for a fun new addition to our treasure chest of internet memes: We'll give it an honorable spot, right next to the series of tubes and the internets!