Hah, that's funny: The word "ginormous" made it into this year's update of the Merriam-Webster dictionary, two years after it made first place in an online poll for the "favorite word not in the dictionary".

They define it as:

Update: As a reader points out, it only wasn't in Merriam-Webster (an American dictionary) yet -- while it has been British slang for a long time and thus can be found in the Oxford dictionaries. Thanks, Ian!

I need to admit: I was mentally prepared for a phone meeting later tonight. I forgot it's the Fourth of July...

Today, I decided to give my blog a new look -- mostly because I was tired of the old, white, colorless layout. After a little while, I found a nice one in the Wordpress theme directory (so, props to the guy who designed this :) ) 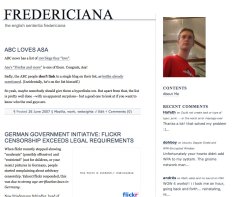 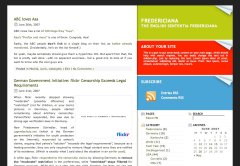 If you find something not working, or you want to let me know that the new layout sucks even more than the old one ;) feel free to leave a comment.

Asa's "Firefox and more" is one of them. Congrats, Asa!

Sadly, the ABC people don't link to a single blog on their list, as kottke already mentioned. (Incidentally, he's on the list himself.)

So yeah, maybe somebody should give them a hyperlinks 101. But apart from that, the list is pretty well done --with no apparent surprises-- but a good one to look at if you want to know who the cool guys are.

As always on my blog, I am speaking for myself only.

Yesterday, flickr launched their German service and at the same time, disabled access to pictures marked as "moderate" as well as "restricted". 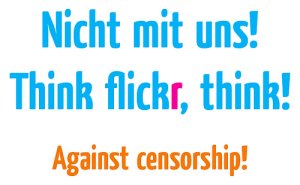 flickr (speaking through staff member heather) justifies this as follows: "The central problem is that Germany has much more stringent age verification laws than its neighboring countries and specifies much harsher penalties, including jail time, for those with direct responsibility"

What seems to have happened here is a misinterpretation of German law. (But please remember that IANAL, I am only spending 20% of my studies on law, not 100%)<!--more--> The law they are probably refering to is Ã‚Â§ 184 in the German criminal law ("spreading pornographic material"). According to this, someone is to be fined, or punished with a jail sentence of up to a year for showing/giving/selling pornographic material to a minor. This is the case on the internet as well, unless there are "effective measures" in place to keep minors from accessing the material.

There are several notes to make: In order for this law to be applicable, the content in question has to be pornography. The German definition for pornography is rather restrictive: It is material exclusively or most predominantly intended to cause sexual arousal in the viewer. This means that events like "Nipplegate" (and photos of them) are a non-issue here, legally (just like in many other places in the world). Also for example, showing a woman in the shower, as a TV commercial for shower gel, is perfectly acceptable. When it comes to act photography, the distinction is harder of course but the decision leans towards "art" if the aesthetic aspects of a picture are emphasized (art is protected by the German constitution).

Moreover, according to a commentary on the law in question, for a content provider on the internet (like flickr) to get punished, it is not enough if they could have assumed there might be such content on their page. Instead, positive knowledge is required, i.e. they need to know about a particular illegal picture, (probably) leaving them with the option to take it down ASAP when they find it or are informed about it.

In any case, "Possibly not suitable for the general public", which is the requirement for flickr's "moderate" setting, is about as far away from these requirements as it gets. Even "restricted" pictures (in flickr terms: "content you probably wouldn't show to your mum, and definitely shouldn't be seen by kids") are at least not generally violating German laws (quite the contrary, I assume).

Based on this, it doesn't seem surprising to me that a lot of paying, German customers (like me) are quite upset about flickr's most unprofessional way to handle a possible legal issue: by deciding to block many, many entirely harmless pictures from their sight. Some of the users even threaten to leave flickr very soon if they don't solve the problem within the next fourtysomething hours: 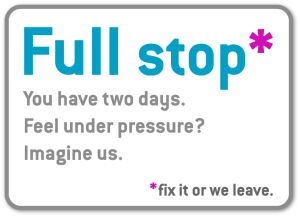 And while I am not as strict about the "two days" as others, I am certainly not going to prolong my flickr "pro" account if this absolutely unacceptable content filtering stays in place.

I think we can at least expect Yahoo to pick up a phone and call a German lawyer who can explain the law to them. When I look at how much their official statements sound like "we will all go to jail!", they can't possibly have done that.

And worst of all, at the moment, Yahoo/flickr is massively damaging the reputation of the German legal system in the world by making people believe the core of the problem is Germany's fault ("Oh Germany. Here we tried so hard to get past the whole "Hitler" thing and then we were so proud of you for tearing down your big ol' wall, but now you come up with this and we have to be worried all over again." is one of the nicer quotes here).

I hope this text helped some of my international friends (and other interested readers) understand the issue some more and maybe it keeps them from getting a wrong impression about Germany and its laws.

(Note, again, I am not a lawyer so none of this is legal advice.)

If Apple was Target, Microsoft would be Wal-Mart.

Joel on Software about Font Rendering on Windows vs. OS X. Interesting how their different algorithms sacrifice font character for crispness and vice versa.

So yeah, another day, another blog meme, and this one seriously is on the cheesy side but fair enough: I am C++. ;)

Which Programming Language are You?

I am not sure if that's a good or a bad thing -- especially considering I haven't coded in C++ in, well, forever. The closest I've got in the last years was Java cause most programming assignments in my university are in Java. And whenever I can choose freely, let's just put it like that: C++ is usually not on top of my list.

Now, which one are you?

(via binblog and JP (who is Prolog: talk about weird programming languages!))

Sun, who founded the OpenOffice project by open-sourcing the StarOffice program code shortly after they acquired its former vendor StarDivision, are going this way due to the increasing use of Macs. They write:

Why is Sun joining the Mac porting project? If you look around at conferences and airport lounges, you will notice that more and more people are using Apple notebooks these days. Apple has a significant market share in the desktop space. We are supporting this port because of the interest and activity of the community wanting this port.

I am very glad to see this happen as it makes a native "aqua" port of OpenOffice much more likely to happen in this century than it was ever before.

And since most people at Mozilla are using Macs these days, this seems to be something to look forward to for a whole bunch of people.