Just stumbled across this:

Oh thank heaven for the beauty of context-sensitive advertising.

As most people on the Mozilla project, I get quite a bit of bugmail from bugzilla. Needless to say, Google mail tries to adapt to this situation by delivering me the ads that they believe are the most appropriate for the mail I am currently looking at:

"Will you be reincarnated as a bug?"

Well, I hope not! What if they resolve me INVALID?

Minefield, pfft... what kind of name is that? 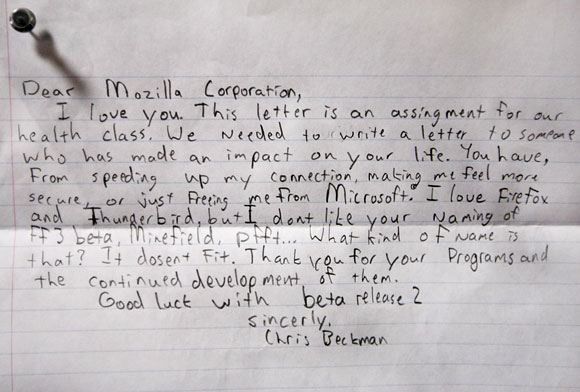 From a funny love letter Mozilla received. It's part of a nice picture series wired.com took at the Mozilla headquarters. Check it out.

Awesome: Later this year, I will spend a few months doing research and writing my masters thesis as a grad student in Computer Science at Carnegie Mellon University in Pittsburgh, Pennsylvania.

It took a few months to get a handful of question marks out of the way, but now I am quite confident that it will work out just fine.

A lot of people may have heard the name Carnegie Mellon before, but for those who haven't, CMU is a private university with a good computer science program. According to Wikipedia, the college is pretty decently ranked and was "named one of the "New Ivies" by the magazine Newsweek in 2006".

Having been to the American East Coast only once before (on vacation to New York City), I am excited to see what the differences and similarities are between life there and what I experienced in Oregon and California. Oh, and if you happen to know Pittsburgh and around and would like to suggest something I certainly shouldn't miss out on when I'm there, please drop me a line :)

Ah, for those of you who have wanted to try out the latest Firefox 3 Beta all along but were hesitant because they feared it screwing with their local data (current profile etc.):

PortableApps offer the Firefox 3 beta as a USB-stick-ready package that won't touch anything on your local computer, making it safe and fun to try out for anyone who's feeling curious:

Mozilla Firefox®, Portable Edition is available packaged with Mozilla Firefox 3 Beta 3, allowing you to test all the latest features in the upcoming version without disrupting your current Firefox installation.

Have fun... and take a guess in the comments!

Update: I fixed Song 4 and 9 because they made way too little sense. Oops ;)

It's been a while since I have blogged geekiness, but this one is really necessary: Today I installed a test box with an instance of the Xen Virtual Machine Monitor, with Debian Lenny as the Domain 0 (or Device Driver VM, as the researchers at my university like to call it).

The reason was that I have to run a piece of legacy software that is in SCO Unix binary format, which is incompatible with the (unaltered) Linux kernel. There is the linux-abi project whose kernel patches bring SCO binary compatibility to Linux, but I always try to avoid rebuilding the kernel because I won't be able to update it anymore with the distro's means; instead, I have to rebuild the kernel myself when I want to update, and (much worse), before long I am likely to end up in a situation where I am unable to avoid breaking package dependencies -- keeping an up-to-date system should just not be that hard.

Thus the idea was born to run several virtual machines on the same hardware, dedicating one of them to the task of running the legacy software, and another one to running the more up-to-date standard services.

However, this still doesn't change the fact that I would have to build a special linux-abi patched kernel, and this time even worse: It would also have to be modified for running in a Xen domain. To save myself that pain, I looked for alternatives and found the binary compatibility page in the NetBSD docs, stating that it supports UNIX binaries (including SCO) out of the box (and many more). Furthermore, NetBSD has apparently been supporting running on Xen since quite a while now.

Installing NetBSD into a Xen VM (following the howtos) is supposedly quite easy. I created an LVM volume on the harddrive to put the new system into, set up that partition as well as a current NetBSD ISO image as virtual devices, and pointed the config file to a special NetBSD installer kernel image for Xen that NetBSD provides. Then I tried to start installing the VM. But, ouch, Xen claims: "incompatible kernel". Hm. Wasn't that easy after all.

As it turns out, the problem is that current Debian kernels are all compiled with Intel's physical address extensions (PAE) enabled: In short, common 32bit hardware can only address 2^32 bytes of physical RAM, that's about 4GB. For modern systems, this can be a little short, so extensions where built to support more than that. Modern Linux distributions support them and they usually don't harm even if you have less RAM than that; sadly, the stable NetBSD distribution does not support PAE yet, and running two systems on the same physical box that have a different understanding of how to talk to physical memory does not work.

But, lucky as I am, just a few weeks ago, NetBSD/Xen hacker Manuel Bouyer has implemented PAE support for NetBSD to an extent that allows it to run on a Xen system with PAE-enabled dom0. Thanks, Manuel!

The respective installation and regular kernel images can be found among the daily builds on the NetBSD FTP server, and if you use these kernel images instead, you'll easily be able to get a NetBSD instance up and running without touching the stock Debian kernel.

As expected, NetBSD was able to run the SCO binaries, so far without problems. A few iptables rules on the domain0 will soon be in place to transparently forward requests for this service to the NetBSD VM, so clients will never know that it is not the Linux server itself responding to their request, but a little virtual machine running in the background.

"Another Difficulty for a Microsoft-Yahoo Marriage: Recruiting"

-- an interesting NYT article about how big companies become an increasingly less popular workplace for young engineering talent, in favor of smaller companies, where they have more impact and some of which have the potential of making them rich if they take off.

(Thanks for the link, Paul)