Looks like I was right holding off on the new MacBook Pros for a while: A huge part of the users apparently experiences problems with the "no button" trackpad not registering clicks:

A tip came in this weekend from someone with a fleet of new MacBooks. His complaint? Every 50 or so clicks and the trackpad freezes for 5 to 10 clicks and then wakes back up.

The users in the comments over at CrunchGear also note that the click of the new "button-less" trackpad is considerably louder than the previous versions' button, which is why some of them have switched on "finger-tap" clicking (incidentally a feature that I disabled on my laptop because it mistook my moving the mouse as a click too often). Maybe it's a case of nostalgia: Dear younger generation, this may be news to you, but keyboards always used to have an audible "click" sound whenever you pressed a button (and I can't believe that's how old I am already ;) ).

Let's see how long it takes for the first hardware and software fixes to be released. And for old times' sake, when will the first battery factory recall be? 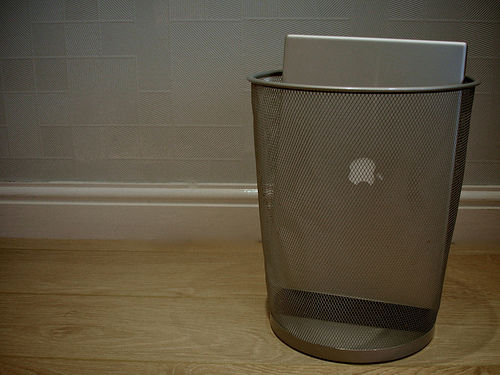