In the Euro 2012 group stage, we've seen an awful lot of ties (usually: 1:1) so far, which begs the question: What are the tie-breaker rules in case two or more teams in the same group are tied for points at the end of the group stage?

A quick look at the competition rules, section 8.07 shows (emphasis mine):

Compare this to the 2010 FIFA world-cup tie-breaker rules and you'll see that they are quite different: The FIFA puts the overall team performance in the group stage first, while the UEFA cares more about how the teams in question compare with each other. That means that two teams can be tied for points, and the one with a much higher goal difference can still draw the shorter straw if they lost the match against the other team in question.

Also, I applaud the UEFA's choice to consider fair-play conduct as part of their tie-breaking rules, though putting it behind the "team coefficient ranking system" makes it look not too sincere. After all, the current rankings don't show a single pair of teams with the same coefficient, so the fair play rule would never apply. Likewise, to cynics, the UEFA rules might convey the message: "If you're ranked high enough, you don't need to care about fair play."

While stumbling across the net, I found this, The New Yorker's Thanksgiving cover from 2006: 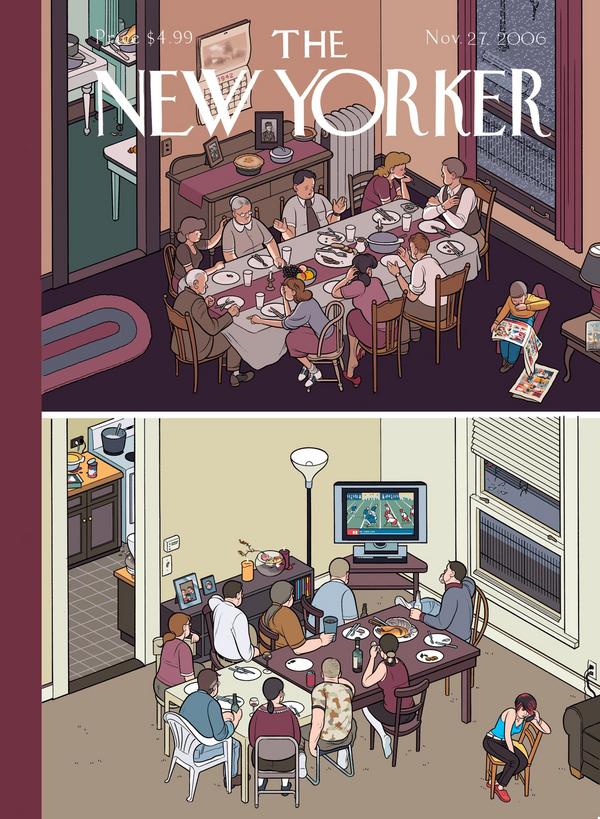 The illustration feels a little sad, though I am not sure what I am sadder about: That they can watch football and I don't ;) Or that digital distractions take away from the traditional family gathering called Thanksgiving.

Just in time to get you all ready and prepared for the Super Bowl XLIII, here is a little video on the "mystery of the yellow line".

The yellow line denoting the current 10-yard "target" is one of the most impressive things for me about football coverage on television. In fact, it gives viewers at home an interesting advantage over both the fans in the stadium and the referees. Even in situations where the distance needs to be measured exactly on the field, the people at home already know if it was or was not enough to make the 10 yards---so they can relax and enjoy the refs' effort to confirm it. In addition to these little moments of superiority, the sheer awesomeness of mashing up live video with a smooth overlay---while not painting over players' legs etc.---is some seerious geekness I find deeply fascinating.

Now of course, just to be fair, European television channels do similar things in the mean time. For example in soccer, they show the distance to the goal line for free kicks. Still, due to the different objective of American Football, the advantage is much more striking there than in the European sports I know.

Have a fun Super Bowl with your friends and---of course---root for the Steelers!