In last Friday's edition of Oregon State University's daily newspaper, The Barometer, I found an article criticizing Barack Obama's tax policies. The writer, Peter Druckenmiller, a junior in new media communication, basically argues that Obama is opening a can of worms by raising taxes for the rich and will as a second step raise everybody's taxes as well. Therefore, the author opposes any type of financial support for people who haven't paid many taxes in their lives, for example students.

So far, so good. Druckenmiller finishes, however, with a curious Third Reich comparison:

Martin Niemöller once said, "When they came for me, there were none left to speak out." He was referring to the Nazi's ideology of selecting one group to persecute, and laid out the Nazi progression from Communists to Jews and finally to himself. The same logic should be employed when examining the class warfare of Obama and Biden: if we allow any to be exploited (wealthy or not), then we are allowing all to be exploited.

Unlike many of my fellow Germans, I am usually not sensitive to nazi comparisons (I must confess: I am a fan of Seinfeld's soup nazi). However, this one struck me as so inappropriate that I decided to write a letter to the editor. Comparing the systematic extermination of political and ideological opponents with any type of tax policy is going too far.

Here is the short comment I wrote to the paper:

Congratulations, Peter. By making a grotesque nazi comparison in the last paragraph, you managed to lose every ounce of credibility you tried to build up in the entire article before. That, my friend, takes serious skills only few will ever master. Quite ironically, your apparent, kafkaesque fear of "communism" was much more a property of national socialism than financial support for society's most needy members, that you choose to compare so inappropriately with it. It doesn't even matter if people follow your--admittedly weak--arguments or not (you may have missed that "richer people pay more" is not an unknown concept even in the US, with a progressive income tax like most countries), if you want to convince, not deceive, people, you first need to get your research straight. Maybe you shouldn't have stopped reading that history book of yours after the first page after all.

Writers, please learn a lesson from Peter: Arguing with extremes is hardly ever convincing, in particular if you mess up the comparison. If you have a nazi reference readily available for your next submission to your school's newspaper, I suggest you leave it in your pocket and consider arguing differently. Chances are people may read, maybe even agree with you, and above all, you avoid making a complete fool of yourself.

Update: Jean Pierre points me to Godwin's Law, which, in turn, led me to the logical fallacy named "Reductio ad Hitlerum". Druckenmiller abuses a Nazi comparison in an apparent attempt to avoid rational discussion of the issue at hand.

"I dislike criticizing fellow Barometer columnists, but Wozich and Druckenmiller deserve it. In fact, I'm not just calling them out, but demanding they have their GOP American flag lapel pins removed and placed in safekeeping until they can prove they are capable of avoiding Godwin's Law."

Thanks, Bill, for reminding me that student journalism isn't completely out of its mind quite yet.

A common stereotype about the US is, if you can think it, no matter how odd it is, there's somebody in the USA who does it.

I apologize therefore that this country still manages to weird me out. Like in the case of the Idahoan Politician who changed his only and legal name to "Pro-Life" (as a way to express his opinions about abortion):

A Senate candidate has legally changed his name to Pro-Life and will appear on the ballot that way this year, state election officials say. As Marvin Pro-Life Richardson, the organic strawberry farmer from Letha, 30 miles northwest of Boise, was denied the use of his middle name when he ran unsuccessfully for governor in 2006 because the state's policy bars the use of slogans on the ballot. Now, though, officials in the Idaho secretary of state's office say they have no choice because Pro-Life is his full and only name. He says he will run for the highest state office on the ballot every two years for the rest of his life, advocating murder charges for doctors who perform abortions and for women who obtain the procedure.

Incidentally, having seen an Idaho absentee ballot, I can confirm him showing up as "Pro-Life, a person formerly known as Marvin Richardson".

Ignoring his political agenda for a second: Are you kidding me? Big Superman fan? Name your kid "Kal-el". Into pork? Why not call the little fellow "I-love-bacon"? (Oops, now I gave Scott an idea for his next child). There's really nothing crazy enough not to be done over here. Wow.

Vice presidential nominee Sarah Palin never grows tired of telling the public that she's just an average person, that she's part of the average American middle class, and other stories from a happy little box of hockey mom fairy tales.

That's why her party allegedly spent 150,000 dollars on her wardrobe:

Sarah Palin’s wardrobe joined the ranks of symbolic political excess on Wednesday, alongside John McCain’s multiple houses and John Edwards’s $400 haircut, as Republicans expressed fear that weeks of tailoring Ms. Palin as an average “hockey mom” would fray amid revelations that the Republican Party outfitted her with expensive clothing from high-end stores.

Don't get me wrong: I agree that a politician with such a high public exposure can't walk around in sweatpants and t-shirts. But don't pretend you are just an average person, worse even, try to make people believe you have the same financial situation as the average American middle class family. Unless, of course, the average American goes shopping on Fifth Avenue, in which case, never mind.

There's a 106-year-old American nun living in Rome who plans on voting this year again for the first time after she voted Eisenhower in 1952:

Sister Cecilia Gaudette, who last voted for President Eisenhower in 1952, has registered to vote and says she will vote for Democrat Barack Obama. Although hard of hearing, she keeps herself informed by reading newspapers and watching TV (...). Asked about her hopes for the US under an Obama presidency, she says: "Peace abroad. (...)"

She could well be the oldest person to vote in that election. I find it impressive how much she still cares about politics, at an age few will ever reach.

The New York Times write, Gov. Palin of Alaska abused her powers to get her former brother-in-law fired:

A 263-page report released Friday by lawmakers in Alaska found that Ms. Palin, the Republican vice-presidential nominee, had herself exerted pressure to get Trooper Michael Wooten dismissed, as well as allowed her husband and subordinates to press for his firing (...) Further, it says, she “knowingly permitted a situation to continue where impermissible pressure was placed on several subordinates in order to advance a personal agenda.”

That raises one question for me: What would she do in the West Wing, if, say, she saw a way to advance her family's careers by using a bit of her power? Or if there was a way to give homeland Alaska preferential treatment over the other 49 states?

One thing is true about German politicians: If they do don't care much about their work ethics at home, they do not turn into model citizens either once they go to Berlin. I doubt that it's any different when you fly from Alaska to D.C... 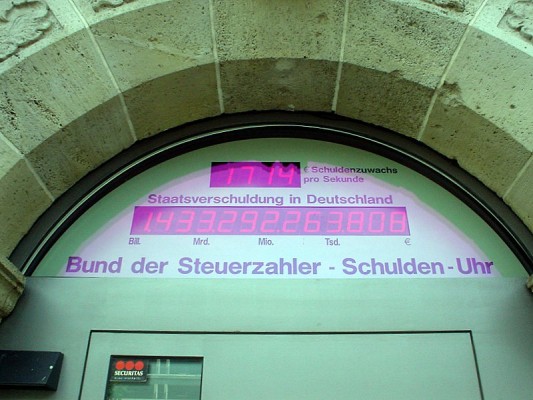 In response to yesterday's vice presidential debate, Aden Renkai came up with the following, fabulous litte flow chart that describes pretty well how it went down from Alaska Governor Sarah Palin's point of view--in fact, probably better than I could describe it with words... "Darn right!"

Critics say, she was doing pretty well, and it seems, her constant references to her family made a good impression too. However, considering the expectations towards her had been lowered to a mere "do no harm", her real merit was in not costing McCain the presidency on the spot. That makes it almost forgivable that instead of answering the moderator's questions, she went back to energy politics over and over again (we get it, you would like to drill for more American oil). Almost. <!--more--> Biden (or O'Biden, as Palin called him once), on the other hand, didn't say many surprising things either, as he decided not to address Palin (not to lose "hockey moms'" votes across the country), and instead fought against his absent adversary McCain. More interesting than what he was saying though was his signature grin: I couldn't help but wonder, where did I see that before?

Later, it struck me: Joe Biden, much like Ronald Reagan a few decades earlier, was an actor before he entered the world of politics. His only, but famous role: 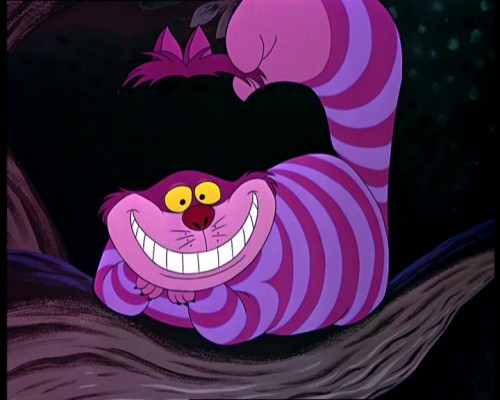 The Cheshire Cat in Alice's Adventures in Wonderland.

The winking Palin, by the way, led to a lot of amusement in the lecture hall I watched the debate in: It was grotesque that she behaved so similar to her Saturday Night Live parody (that has recently virally bubbled up on the internet):

The question is, who is whose parody? Palin - Fey or vice versa?

This morning, I got a kick out of looking at the origins of the license plates I came across while walking to school. To my surprise, there were quite a few, which is why I share the list with you (in alphabetical order, not by preference ;) ):

And two that don't come from a US state:

That's a total of 16 different origins. Not bad for a single walk!

Also, if you'd like to see the history of how license plates looked in your state then and now, I found the website 15q.net that has a pretty comprehensive picture collection that's worth checking out.