Last week, I had to back out a (quite big) patch from the to-be-published addons.mozilla.org trunk because while it worked on our developer instances, it behaved totally strange on the staging environment: When I saved a record using the newly added UI, the changes partly didn't show up in the database.

So we went ahead and delayed the release of the patch until we figured out what the problem was.

After a little digging around the internet today I found a hint suggesting to flush CakePHP's cached models/table descriptions from the app/tmp/cache/models directory every time a database change is applied -- which fixed the problem we encountered.

So, fellow CakePHP users, keep that in mind next time you alter your DB, and your life will be happier :).

If I was to buy a scooter, it would be this one -- And no, Mozilla is not expanding into the scooter business ;) 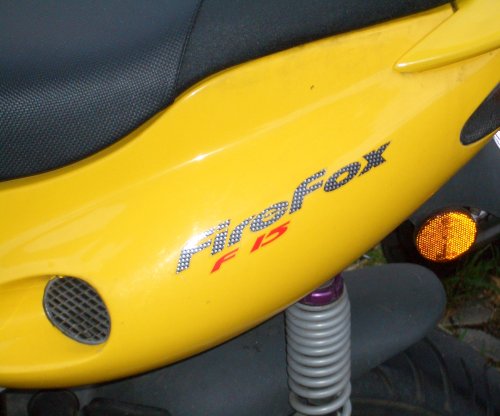 This is a picture I took a long long time ago in Karlsruhe and just now stumbled across again.

As we all know, September-born children are the best anyway (well, at least I did).

Sadly, they also seem to be among the most badly sighted ones:

Israeli researchers now found out that being born during the summer increases the risk of becoming near-sighted significantly:

Children born in June and July - the months with the most sunshine - are 25 percent more likely to become nearsighted (myopic) than those born in December or January, according to Israeli research just published in the on-line edition of the most prestigious eye medicine journal, Ophthalmology. (...) The more light a newborn is exposed to after birth, the more the eyeball lengthens, according to the study, causing images to be focused in the vitreous part inside the eye rather than on the retina at the back of the eye.

Well, at least now I have a clue where my glasses come from -- and I guess I am lucky not to be born during the really bright months, or I'd be a total mole.

(Link to the article, requires subscription)

Update: This got boingboinged. Thanks, Xeni!

A teen from New Jersey unlocked the iPhone, so it can be used with non-US phone networks. Nice move.

The hack takes "about two hours and involves some soldering and skill with software" though, the guy says. So, if you don't want to brick your phone, maybe it's not such a good idea after all.

Also, I wonder how long it takes until the companies in question sue the bejesus out of that kid. Or, if they are smart, they just hire him. We'll see.