So, I posted this a while ago in German, but I forgot to put it on the English blog, too:

It's time. After studying at OSU for a year, I now have to go back and finish my masters degree at my home university in Germany, the University of Karlsruhe. Well, almost. My German university demands an internship for the completion of my degree. Thus it's time for me to leave the OSU Open Source Lab and its "most important racks in Open Source". Sad, really sad. And I leave half sadly but happily as well: Sadly, because for a soon-information-engineer, working passionately on Open Source Software while studying (and even getting paid for it) was pretty cool. I could see from the inside what holds the world of Open Source together, and I was pleased to collaborate with some of the finest people in the sphere of free software. Recently for example I even had the opportunity to visit the "OSCON" Open Source Conference in Portland, Oregon. At the OSL, we were not even short on geek-ness: Working only a few feet away from the Linux Kernel master server, important Gentoo and Debian servers as well as Apache and phpBB boxes, that is more than unique and a reason for me to say, Thank you, OSU OSL! But then, there's also the happy side. Because after a marathon of job interviews (around 15, if I remember correctly) with different companies (not 15, of course but I was passed on between different people) I could decide a few weeks ago where I wanted to go for an internship. Of course, it is Open Source related. Since the beginning of October I am proud to work at the Mozilla Corporation in Mountain View, California as a Software Development Intern.

Now I am here (moved to the Silicon Valley), I've been working at Mozilla for a week now and I really like it. People are nice, the environment is geeky and relaxed and I like how many interesting things are happening here. Good to be with you, Mozilla people!

Truly, there have to be things you are looking forward to at work. Here at the Mozilla Corporation, this is currently the Firefox 2 release: 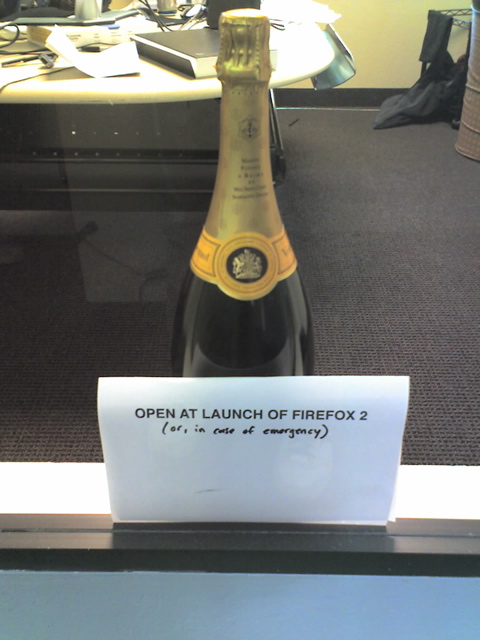 (picture of my boss' office window)

I can't wait for the Fx 2 release. And a little bit, I am even looking forward to the Veuve Clicquot :)

Some things in geek world tend to be a little confusing. Such as the internal differences between SCP and SFTP. Both of then use the SSH protocol to transfer files from one server to another securely encrypted.

Now, sometimes I copy a few things over the "big pond" from Germany to the U.S. and even though the sender is able to upload more than 50k/s (and the receiver can download much more than that), SFTP doesn't get any faster than 15 kilobytes per second.

When I try the same transfer, a minute later, with SCP, I get roughly 60k/s, which happens to be the upload limit of the sender.

Any clue why this is happening?!

So, this last week I had to move to a new ISP with my web pages and domains because the old one decided to close their business. Sad enough, but then I decided to get a new virtual server, mainly because I have much more disk space there now and the performance should be a little better if you only share one physical box with a handful instead of hundreds of people.

Now moving is over and this blog is proudly served to you by my new server (which by the way listens to the nice name aurora, the ancient greek goddess of the dawn).

Aurora serves HTTP, Mail and a little MySQL obviously, all of which using SSL transport encryption where applicable.

My Mail servers of choice are, by the way, exim and dovecot.

I chose Exim for a number of reasons: I recently read a lot of good things about it, for example in the Linux Weekly News MTA comparison. It is easy to set up, quite secure, and it is the default MTA delivered with Debian stable. Then again, as a good example of how well Exim works (and scales) I have my German home university which uses it for all > 20000 people on campus.

I got it working with virtual domain handling, virus and spam filtering and SMTP-Auth over TLS in little time. A few very good howtos are available on debian-administration.org.

Then for IMAP serving, I had the choice between Cyrus, Courier and Dovecot. I decided against Cyrus because fellow sysadmins warned be that it is a beast to set up and there is little use going through all that pain unless you have a good reason to (a big, big userbase for instance?). I only have a handful of users (as you might have guessed from me mentioning a virtual server up there). I eventually decided against Courier because I knew that dovecot was exceptionally easy to set up and it would server IMAPS for me almost immediately.

However, one good thing I used from Courier are Maildir mailboxes. Dovecot can handle them too, and they provide a much better immunity against breaking your mail folder than traditional UNIX mbox files. (They also scale better.) One thing to consider though is the block size of the filesystem, because for every single email at least one of these blocks is going to be used. But the block size happens to be 1k on my virtual box, so even 1000 small emails would only take 1 MB on the disk.

If there are any questions, or if something that worked before magically broke now ;), let me know.