That kind of impressed me today when I saw this Washington Post article on digg.com:

A Washington Post poll shows that the majority (63%) of Americans are ok with the cyber and wiretapping efforts of the NSA. Almost the same percentage, even a little more, are ok if their personal calls were collected by the NSA. Americans are apparently willing to sacrifice privacy for security.

That disturbs me a little bit. Are these people concerned about privacy so little? Are basic civil rights not an issue, as long as gas is cheap? It seems to be a socially inherent problem in the U.S.: Society (in the majority of cases) here seems to be highly judgemental, insisting on personal freedom far more than I have ever seen before but at the same time not leaving their hands off issues that are just not their business, i.e. somebody else's private concerns. <!--more--> For me as a foreigner, this is a highly interesting, unusual paradox to watch. Everybody claims to be trying so hard to keep the government out of their lives, not pay many taxes, almost unrestrictedly bear arms, etc.; however, when it comes to revealing your whole life to random people, including governmental organizations, in fact they sacrifice so many basic rights that I myself are sometimes deeply impressed and also a little sad. How come do I have to do a big "screening" process when I want to move into a new apartment, for example? Why do I have to put my social security number on almost every ridiculous small flyer I am filling out somewhere? Why are companies selling my address and additional information to other companies without my consent (and without getting punished)?

People here say that other countries are not as free as this one (quote: "Is Germany a little free too, or are you totally excited about being in a free country?"). They say, we can bear arms, you can't. They say, gas is so expensive in Europe. They say, you can't be a Nazi in Germany, so it's not free.

But when it comes to rights of personal freedom, e.g. the sanctities of the home (which are much easier to circumvent here than where I come from), "innocent until proven guilty" (which seems to be the other way around, just in case your word stands against the one of a cop) or simply informational self-determination (i.e. deciding what information to give people about yourself and what not), people are so up to sacrificing every single piece of the rights that truly make a democracy a place worth living in. Not to speak of basic things that, sorry to say that, are just none of everybody else's business but the people's who are involved. Are the people who shout the word freedom out so loudly the same ones that took ages (in fact, till 2003(!)) to eventually realize that other people's bedrooms are usually not of public interest (many still don't believe it)? The same who gladly sell you a gun years before they allow you to have a beer with your lunch?

I just want to shake them. Wake up, you are sacrificing yourself here. Get conscious. Life is not about getting three cents off the gallon of gas. There's more to it.

But they keep sleeping.

Too bad my NSLU2 apparently does not have a battery inside...:

To keep track of my numerous bookmarks on the Internet, I use the popular bookmarking service del.icio.us, along with a handy Firefox extension.

Well, when you accidentally hit the "tag" button on a newly opened tab in Firefox, this is what happens:

Due to the ginormous amount of information stored on that web page, I decided to keep the bookmark as a valuable resource for my daily Internet research (after all, it is the "home" page in my web browser and thus the first page I ever see when opening Firefox). ... And so did 2362 other people who were as smart as me to bookmark about:blank ;) 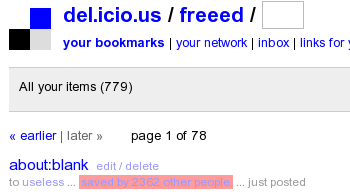 Recently, I have to do a lot of point plots for one of my classes, i.e. taking huge amounts of two-dimensional data points, having them "drawn" and printing out the resulting image.

Usually, for this job, I used Maple, mostly because this is my computer algebra system of choice since I used it in my advanced math course in high school. It is just so much better in tedious arithmetic than I am ;). Writing a little script, I read in the provided data file by the teacher and returned an expression that I could directly copy and paste into Maple. The resulting graphs look somehow like this:

However yesterday, I managed to break Maple. I read in two lists of a few hundred data points each and wanted to plot them together with a function in one plot. So far so bad: In spite of the correct syntax, I got some evaluation errors and an empty plot. Great.

So I tried gnuplot, the apparent "industry standard" for all sorts of scientific data and function plots (unless, of course, you spend a sh*load of money on Matlab ;)). And, within minutes, thanks to the numerous howtos on the Internet I was able to make much more beautiful (and working) plot such as this one:

And I finally understand why so many people are using it: It is just the right tool for the job.

One tutorial I want to point out in particular are the not so frequently asked questions that helped me a lot to get the trivial, not-so-trivial-after-all tasks done to get a little more sleep and spend a little less time on homework. :)

Long time no blog. Didn't have too much time to do geeky stuff recently :-/

You know that the world is still spinning the right way when: