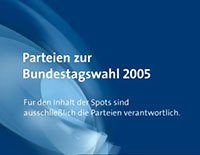 Movies and TV series are shown in the U.S. quite a bit earlier than they come to Germany. (They have to be translated etc...) Usually I don't care but when you go to the U.S., you're heavily endangered to miss good films and TV series. - Crap.

I wanted to see Sin City in the original, english version while I am still in Germany, but no movie theatre anywhere in Karlsruhe shows it in English. They all have the German version, though. Plus, there is no chance to see it in a cinema in the U.S.: The film has already left cinemas for quite a long time and the DVD was released two weeks ago. Argh! (Hm, maybe they offer those dvd rental machines in Oregon, soon?)

Another PoA (point of annoyance ;) ) is that CSI: NY starts on German TV just next week, but the first season has already been on TV in the U.S. a lot of times. I nearly assume, if I eventually happen to get a TV (or freevo? :) ), the second season will start before I were able to see the first one. grrmpf

Okay, you're right: I really shouldn't watch TV at all. It's too frustrating ;)

But I'm going to watch quite a lot of new movies and tell my German friends if it was good - for them to be excited for about two months until the film comes to German cinemas! I am so evil, I know ;) hehe