Second Bugzilla-related user script today: Bugzilla 3.2 introduced a keyword chooser that always pops up when you click on the keywords field. Sadly, it keeps you from entering the keywords by hand, even if you know exactly what you want to type. Choosing it from the list and clicking the arrow, then okay takes much longer.

So here's another very simple Greasemonkey user script that just reverts to the original behavior of a simple text field: bugzilla-fix-keywords.user.js (click to install)

I really think instead of the current chooser, a simple keyword suggestion feature should be used that works somehow like the del.icio.us tag find-as-you-type feature: 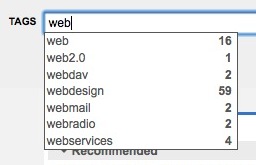 That could be another user script (or rather an extension to this simple script here). Anyone feel like making it?

Update: This user script of mine has also been deprecated by the fix introduced with bug 452734 -- we now have a convenient auto-complete feature, similar to the one I suggested above. Great! Here's a screenshot:

Rumor has just recently hit the blogosphere that Google's GMail was to introduce clickable and colored tags for emails. Today apparently my account was added to the test group (or was it generally released? I don't know).

I think I like the feature, since it has also become a one-click operation now to remove a tag from a mail; a feature that comes in very handy when you accidentally mis-tag a mail and want to fix it quickly:

That being said, now Google only has to come up with a faster way to actually assign tags to emails. For me, neither the dropdown list in the single mail view nor checking a bunch of mails and then using the dropdown list in the mail list view are particularly appealing ways of categorizing emails. While it is not too tedious or unbearable, there may be quicker ways to achieve this. One idea would be suggesting a handful of existing tags in the mail view (addable with one click), judging by the similarity of the current mail to the ones that you have previously tagged with a particular tag. This would have the charm of being both fast for the user and also suggesting classification of emails into categories, even from people who have never sent you a mail before and before you have even thought about making a filter rule to auto-tag similar emails. (And I just made this up off the top of my head, so please feel free to yell at me in the comments if you dislike my suggestion).

By the way, the CSS for the tags seems to render them too low (see the screenshot), with the Firefox 3 nightlies. I wonder if this is a Firefox rendering issue or a bug in the CSS Google uses.