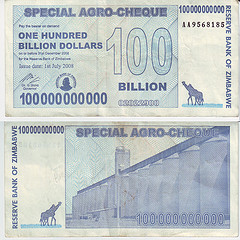 As temperatures in Pittsburgh approach -20 degrees Celsius (or minus 4 degrees Fahrenheit), here are some curious news from warmer parts of the planet:

Zimbabwe is introducing a 100 trillion (!) Zimbabwe dollar note, currently worth about US$30. That's a one with 14 zeroes. This is the latest in a series of releases of new bank notes as part of Zimbabwe's fight against hyperinflation. (Pictured on the right: Its "little brother", the 100 billion dollar note).

Germany once suffered under hyperinflation as well, back in 1923. Wikipedia writes:

Luckily, all of this is history. What remains are (now) funny pictures of people using money in unusual ways, such as wallpaper: 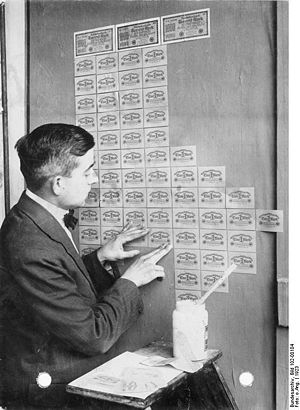 That reminds me, I think at some point, my family had a few high-denomination notes from the time (that are sadly still "worthless") -- I may scan and publish them if we can still find them.

For Zimbabwe, we can only hope that one day, they can look back at their old pictures and find them amusing too. For now, their political and economical situation is not enviable.