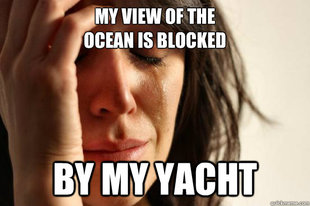 They idea is that it's a whiny statement (fishing for empathy, perhaps) that expresses an outrageous level of entitlement. So much so that it appears certain that this person has never encountered an actual hardship in their life before, nor do they realize that probably over 90% of mankind (entire continents!) are worse off than they are.

From the outrageous and (hopefully) made-up statement above, this meme has sometimes made its way into popular culture, when actual people make actual statements that show a baffling disconnect from "real" problems.

The first world has real problems, too

Sadly, people also seem to do this when actual problems just happen to be located in the "first world":

Sure, perhaps "Bob" is just being a jerk by implying, as long as you're not in life-threatening danger, you are doing better than many people on this planet and therefore you have no reason to complain. Sure, maybe Alice needs to pick her "friends" more wisely.

However, the real danger I see here is when this results in proactive self-censorship by people who fear being stigmatized as whiners but would otherwise have every reason to complain about legitimate problems -- and may need to create awareness to change the situation for the better.

In a legal context, this is called a chilling effect, when the threat of penalization caused by overly broad laws keeps someone from saying what they want to say. Unfortunately, social pressure like this can have the same effect.

It is hard to quantify how much of a real issue that is, since by its very nature, self-censorship is virtually impossible to detect, unless the person considers not complaining about a real problem, then does it anyway and shares this fact with us. One example is a recent post by Linus Torvalds, complaining about the crazy setup of the US public school system and a misguided attempt of the Oregon State legislature to fix one aspect of it -- which Torvalds argues would actually make it worse.

You don't have to be a parent to see concern for the education of one's children as a real and legitimate worry. Meanwhile, Torvalds is well known to not exactly be shy about his opinions.

Oh well. I bet nobody wanted to hear that whine, and I guess I should put the "First world problems" meme picture here, but hey, I wanted to get that rant off my chest.

Would someone less bold than Torvalds but harboring the same concerns still have chosen to write this article? I'm not sure.

Keep that in mind next time you're thinking about accusing someone of whining who may actually have a legitimate case.

Don't be that guy who keeps people from changing society for the better.

I'm blogging about once a week in 2013, on various topics. This is my ninth post of the year.