"Green" programs, like waste reduction, energy or resource saving campaigns are sprouting everywhere. Laudable, generally, but more often than not, I notice that the economics incentives don't support the programs as well as they should.

In economics, incentives are factors that motivate a person to do something. There are different types of incentives, two of which I will focus on here: Moral incentives vs. financial incentives.

Moral incentives work by convincing the individual that something is the right thing to do or somehow socially desirable or respected. Avoiding judgmental looks is a moral incentive to wear pants in public. A moral incentive that works for one person in one way might not work like that for another. If you like people to stare, you might actually be inclined not to wear pants.

Financial incentives are often easier because as a rule of thumb, people like money. They dislike losing money, and like getting money. Store discounts (to buy a product) and cash bonuses (to reach company goals) are examples of financial incentives. There are exceptions to that rule, but at any rate, economists love financial incentives because they are so easy to understand and calculate with.

How do many "green programs" use incentives?

Moral incentives are at the core of many "green" programs.

The California "save our water" program talks about saving water quite abstractly. The moral incentive is to avoid droughts or to make it easier for "certain parts of the state" to provide enough water to everybody, now and in the future. 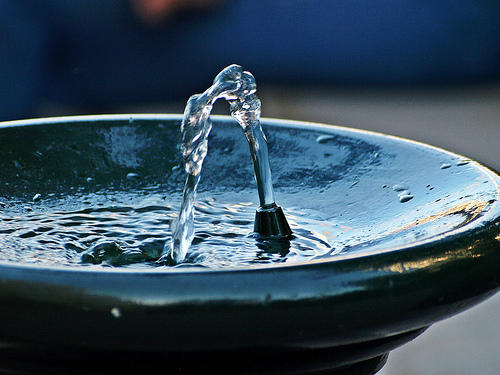 However, there is no substantial financial incentive connected to this program: Your average Bay Area water bill is over 80 percent a fixed price. Only if you currently waste outrageous amounts of water ("that running faucet helps me sleep!") and stop doing that, will you be able to significantly impact your bill. Doing one fewer load of laundry a week? Buying a slightly more efficient dishwasher? With a lot of luck, you'll save the equivalent of half a cafe latte per month. Maybe. 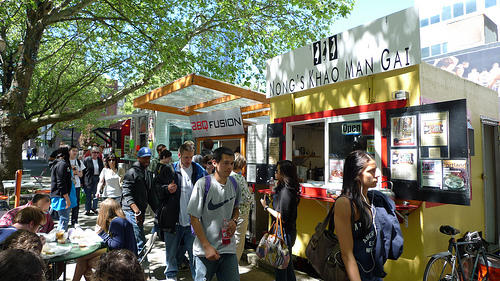 However, this program even provides a counter-incentive, financially. You pay 12 dollars a year, then you receive a token that you exchange for a reusable box, which after lunch, you drop off at a collection point where you get another token back. The detour to a dropoff location (unless your employer provides one) is added opportunity cost, a lost token or misplaced box sets you back another $12. Meanwhile, regular containers remain "free" (included in the sale price).

Ironically, there is a financial incentive for the food cart owners to participate: They receive $2 for every subscription sold. However, they do not at the same time agree to extend any incentive (like a discount) to the customer, or alternatively starting to charge, even only 10 cents, for their regular food containers.

Why is that a problem?

Misaligned incentives mean, at best, that these programs are less successful than they could be: People who aren't "buying" the moral incentive have no reason to participate.

Moral incentives are particularly weak if they are not easily observable by others (like my water bill) or if the social component is not well established (like the preferability of a reusable food container over a recyclable one).

Weak moral incentives without a financial counterpart also cast serious doubt on the respective company's commitment to the "cause": They expect the customer to open their wallet for moral reasons, but the company refrains from putting their money where their mouth is.

How can financial incentives become part of the mix?

City hall is not the only place where such incentives can come from: Take a look at Starbucks' new $1 reusable cup, which they pair with a $.10 discount per drink filling. The company is still the most likely party to make a profit in this process, and it is still early to decide on the rate at which it reduces waste created by the coffee chain. The key, though, is that Starbucks understands consumer economics and realizes that the simple proposition of a refillable cup will not make the program a success by itself.

I wish more "green" programs would use well-placed financial incentives to gently (or not so gently) align a wider audience with their goals. It would prove beneficial for customers who sign up for the program and use it intensively. It helps the merchant by encouraging customer loyalty. And, not least, a successful "green" program will be good for the environment.

Win-win-win. What's wrong with that?

I'm blogging about once a week in 2013, on various topics. This is my sixth post of the year.