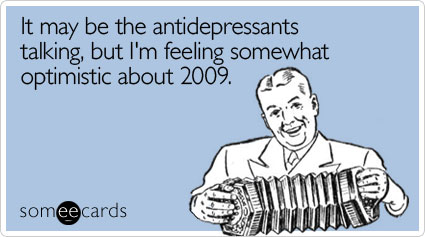 I wish you good, painless new year's celebrations and a fabulous and in-spite-of-it-all successful year 2009. Don't let a "slowing economy" and any other horror stories in the news put you off your personal pursuit of happiness. There are better times ahead!

(funny ecard motive from someecards.com -- and no, I am not on ADs; I am needlessly optimistic enough on my own ;) )

That was a fun little quiz -- and apparently, I acquired an "Inland North" accent (in addition to my German accent? wow). Needless to say, I have never been to Wisconsin, and my home town is well over 4000 miles/7000 kilometers away from Chicago. But, that is true, I do call carbonated soda drinks "pop" (quite incidentally the "correct" word to use both in Oregon and Western Pennsylvania)!

Merry Christmas from snowy Idaho! I haven't been posting anything lately as I am busy taking trips, eating good food, and similar things, and I hope you are equally unconcerned with the Internet these days :)

Here's a pic from our recent sledding in the Idahoan mountains. The snow here is awesome! These are Tara's cousins. Of course, when I tried to gain a similar amount of air, I always crashed ;)

Here's a hilarious JC Penny ad that reminds you what will happen if you get your girl the wrong gift this year (hint, vacuum cleaner: thin ice!).

Phew. Good that I didn't step into that one ;) Of course, badly timed delivery spoiled my surprise today already, but you can't have it all.

(Thanks for the link, Jenny!) 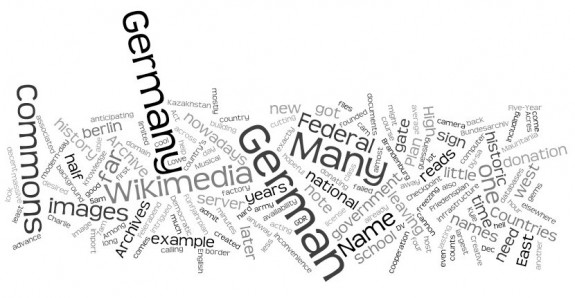 The German Federal Archives (Bundesarchiv) are donating about 100,000 pictures to the Wikimedia Commons, all under a Creative Commons 3.0 by-sa (Germany) license. From the wiki page:

Starting on Thursday Dec 4, 2008, Wikimedia Commons will witness a massive upload of new images. We are anticipating about 100,000 files from a donation from the German Federal Archive. These images are mostly related to the history of Germany (including the German Democratic Republic) and are part of a cooperation between Wikimedia Germany and the Federal Archive.

To our knowledge the donation of 100,000 images is single largest one to Wikimedia Commons so far and we are very hopeful that this is only the start of a long lasting relationship that might serve as an example to other archives and image databases.

As noted elsewhere, in Germany this almost counts as the "hell freezing over": When it comes to availability of historic documents created by the government, Germany has so far had a lot to be desired.

Among the photos uploaded so far by the import script are already some nice little gems of German history, for example: 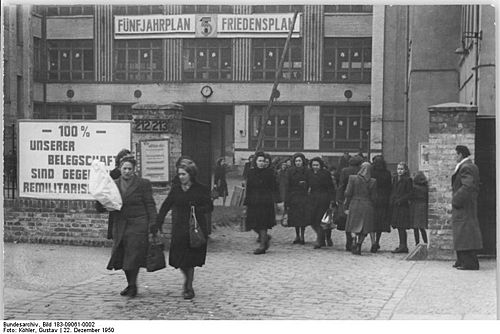 "Feierabend", or "calling it a day" in the GDR. The slogan at the gate reads: "100% of our staff oppose re-militarization" (one and a half years later the East German government proclaimed the need for a new national army and founded it another four years later, in 1956) and on the factory wall: "Fünfjahrplan -- Friedensplan", or "Five-Year Plan -- Peace Plan".

How about this one: 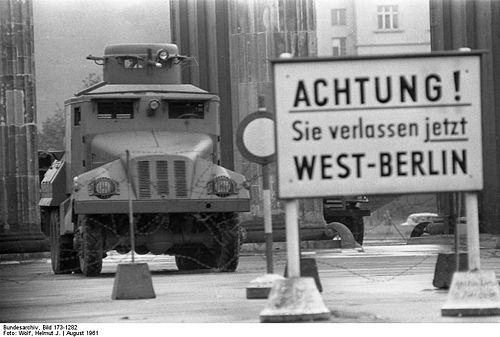 Water cannon at the border between east and west berlin, right at the Brandenburg Gate (note its pillars in the background), only a stone's throw away from the modern-day German national parliament building. The sign reads: "Warning! You are now leaving West Berlin!" -- a similar sign can still be seen at the historic "Checkpoint Charlie".

This is pretty cool:

I remember us doing a video project for a class back in high school, and needless to say it wasn't exactly good, not only because of our poor acting, but also because of us cutting it with the help of two VCRs only. I am intrigued how much you can do nowadays with a "simple" DV cam and a computer. Of course I would have been unlikely to be able to sing for the camera in any decent way, but if you muted it, at least it would look nicer nowadays ;)

A little technical side note:

On Thanksgiving, November 27 between 5am and 7am UTC our server host will perform upgrades on their network infrastructure, leaving this website (and all other domain names and services associated with its server) unavailable for probably about half an hour.

Sorry in advance for the inconvenience.

You should be sleeping at the time anyway ;)