As Adobe's James King has blogged yesterday, the PDF format (in its version 1.7) has just become an ISO standard (number 32000). The final standardization document is expected to be published in early 2008.

Almost a year after the work on the standardization has started, the ballot was passed yesterday with 13 vs. 1 votes. The only country to oppose the motion was France, and Russia abstained.

PDF as an open standard: For the file format landscape, I believe this is a good move. As members of international teams have already known for a long time (at least since the Tower of Babel), you can only really work together if you speak a common language. Standardized, open file formats are the common language of the internet age. Now, PDF is in good company, along with the Open Document File format that has already been standardized in 2006.

Rumor has just recently hit the blogosphere that Google's GMail was to introduce clickable and colored tags for emails. Today apparently my account was added to the test group (or was it generally released? I don't know).

I think I like the feature, since it has also become a one-click operation now to remove a tag from a mail; a feature that comes in very handy when you accidentally mis-tag a mail and want to fix it quickly:

That being said, now Google only has to come up with a faster way to actually assign tags to emails. For me, neither the dropdown list in the single mail view nor checking a bunch of mails and then using the dropdown list in the mail list view are particularly appealing ways of categorizing emails. While it is not too tedious or unbearable, there may be quicker ways to achieve this. One idea would be suggesting a handful of existing tags in the mail view (addable with one click), judging by the similarity of the current mail to the ones that you have previously tagged with a particular tag. This would have the charm of being both fast for the user and also suggesting classification of emails into categories, even from people who have never sent you a mail before and before you have even thought about making a filter rule to auto-tag similar emails. (And I just made this up off the top of my head, so please feel free to yell at me in the comments if you dislike my suggestion).

By the way, the CSS for the tags seems to render them too low (see the screenshot), with the Firefox 3 nightlies. I wonder if this is a Firefox rendering issue or a bug in the CSS Google uses.

Kevin Rudd, who just became Prime Minister of Australia on Monday, immediately got to work and just today ratified the Kyoto Protocol (an amendment to the United Nations convention on climate change).

Now there is only one industry nation in the world left who did not formally commit to a common effort on climate change. You probably know who it is... 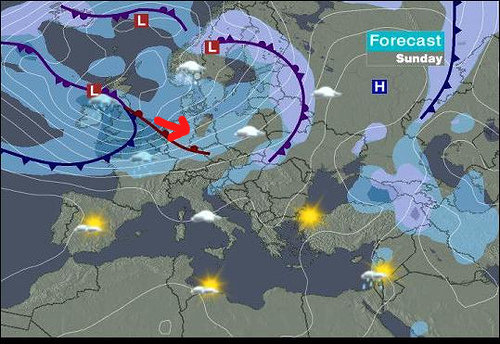 Of course, we really can't expect them to update their maps within 17 years after a major political event.

The screenshot is an actual screenshot from today, but meanwhile, CNN has acknowledged the "recent" developments in world history and removed the obsolete border. Luckily, you can't zoom in any further -- otherwise we'd likely find the Berlin Wall intact and well-guarded ;) .

After German phone carrier T-Mobile has recently started selling the unlocked iPhone for the ridiculous price of 999 Euros, now also Orange in France published their price for the unlocked version of the Apple cellphone: 749 Euros. Luckily for Germans, the EU is a customs union, so they can pretty easily order it in France and have it shipped to Germany -- even the higher shipping won't make up for the 250 Euro difference.

I also hope that the court which ordered T-Mobile to sell the phone unlocked (still a temporary injuction, IIRC) will follow up and make them sell it for a realistic price eventually. Right now, my guess is that the hefty price tag can not be considered effectively complying with the court order. Yet, even with the current price, some competitors start taking advantage of the situation: T-Mobile competitor Debitel (well, sort-of-competitors, they are resellers for carriers such as, you guessed it, T-Mobile) started handing out a 600 Euro signup rebate for people buying the iPhone over at T-Mobile and subsequently getting a contract at Debitel. Interesting.

On other news, German grocery store chains are still selling the (aging but still pretty good) Motorola RAZR for little more than 100 Euros, unlocked and without a contract.

Who ever had the brilliant idea to put the RW logo on every writable DVD kind, no matter if it is actually rewritable or only writable once?

(The DVD+R logo, containing the big letters RW meaning that it is NOT writable more than once.)

I know, there's a de-facto-standard group out there called the DVD+RW alliance. Its well-known members have got together in order to agree on an industry standard for rewritable DVDs. As such, they decided to put an RW into the alliance's logo, and consequently on all licensed products, no matter what kind.

But writing RW in fat letters on once-writable media and only mentioning the actual product properties in fine print, that just sucks. Seriously.

Sorry to say this, but it seems like Apple is doing a pretty good job at curbing the users' joy about new and improved features by the severity of the bugs that have slipped through into the final release. (Don't get me wrong, as I work in the software business I know and understand how hard it is to catch all bugs -- but that doesn't make the remaining ones any more fun ;) )

Some people, including me, experience that their keyboards become unresponsive intermittently, mainly but not exclusively on the Macbook/Pro laptops. This has been described many times on the net, for example by the "Apple Gazette".

For most people, the problem seems to boil down to these key points:

So far, I was unable to find a confirmed solution for the problem, but some readers suggest that the problem has not (yet) reappeared after they reset their NVRAM and PRAM as described in this Apple help document (if your Apple boot sound becomes so loud your neighbor across the street could hear it, you did it right).

Note that this issue was not fixed by the recently released OSX 10.5.1 update (though it fixed a pretty bad data loss issue, so you want to install it).

If you experience the issue too and want to share some thoughts, or if you have other household remedies at hand that may heal "spontaneous keyboard loss", please feel free to leave a comment.

Update: The PRAM reset did not help; after waking up my laptop, I still frequently experience the loss of my keyboard. But as reported in the comments, Apple tech support frequently tells people they know about the problem and they're working on fixing it. Let's hope that's true.

Update 2, 12/19/07: Apple released a software update that is supposed to fix the problem. Please read my followup post.

Today, I received my first MySpace invitation spam ever, featuring some text along the lines of:

Hi gorgeous i loved your profile you want to have great time... blah, blah...

Sadly for her, I am not a MySpace member and probably never will, but when I almost hit the "Report Spam" button, I realized that myspace has a proactive approach against spam from their members (also described in their privacy policy). The end of the mail reads:

If you want to block any emails from MySpace members in the future, you can click here: http://www1.myspace.com/... Or send a single blank email with the subject line "BLOCK" to: privacy (at) myspace (dot) com You can also block future email or direct any other inquiries by regular postal mail to: MySpace, Inc. 8391 Beverly Blvd. #349 Los Angeles, CA 90048 USA

After making sure the mail was not a phishing attack, I went to the provided link and put my address on MySpace's block list and now I am fairly confident this first invitation spam message will also have been my last.

As they tend to live off the sharing of private data, social networking sites almost never deserve praise for something they do privacy-related. This, I believe, is a notable exception.

(Note: A double opt-in system would be even better, yet that would defeat the purpose of "inviting one's friends" into a social network, who have not opted into the network (yet) by definition.)

(Yet I need to say "did you ever solve a complex computer problem while in the shower" is a mean catch question and a geek dead giveaway that I stepped right into ;) )

(Thanks for the link, Kai!)

Apparently, a Tanzanian man died after his knee was operated on. Sad but that happens, I guess. What is worse is that he was scheduled to get brain surgery instead. Consequently, the guy who actually needed his knee fixed got his head worked on and now is paralyzed but slowly recovering (needless to say his knee is still bad).

What the...? As the average patient, this can only mean next time you need to go to the hospital bring a big sharpie and clearly mark the spot that needs to be worked on. For added security, you should also consider covering your entire body with arrows pointing into the right direction. Just in case.

Meanwhile, the family of the guy who died does not seek to sue the government for the unfortunate mix-up, the article linked above mentions; instead, they have "urged the health ministry to employ qualified and compassionate medical staff." Now I wonder -- shouldn't medical staff always be qualified in order to get employed somewhere? But maybe it's just too much asked that medical staff double-checks the files before performing brain surgery on a knee patient...