I've been making a bunch of memes lately, mostly for the fabulous Mozilla Memes tumblr site. Now, not all of the silly ideas I come up with are Mozilla-related, so naturally, I should publish my memes here for your general entertainment!

So today, I had the "sobering" realization that the ruby gems I bought from a trustworthy gentleman on the Internet recently* might not be as valuable as expected: 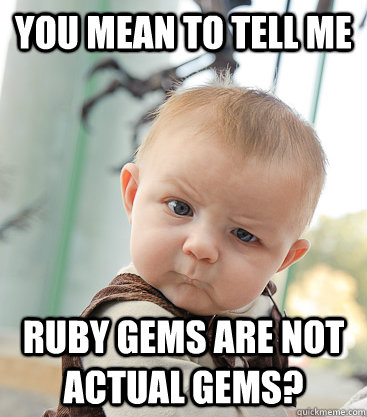 *) this may not be a factual statement.

During the work week of Mozilla's Rapid Web Development in the Bay Area a few weeks ago, we gave a bunch of lightning talks.

In my talk, I am looking at two math problems from Project Euler. For each of them, I am contrasting an intuitive solution with one that is, arguably, faster/better/uses less memory. But is it actually a better solution and an optimization worth spending time and effort on?

Check it out and let me know what you think!

Now that a year of photos on this blog is over, I can get back to dedicating this place to my public disagreement with people who are wrong on the Internet!

Twitter published yesterday that they are now capable of reactively blocking certain tweets for the users from certain countries only, should they be required to censor certain content in one country but not others. Previously, they were only able to remove tweets globally, whether or not certain content was illegal in all affected countries or not. As an example, they mention tweets promoting Nazism, which is illegal in Germany and France.

Mark Gibbs at forbes.com smells the opportunity for outrage and paints a grim vision of proactive, automated censorship at Twitter, and he even announces the beginning of the end of Twitter itself. Sadly, the article teems with outrageous yet wrong claims:

For example, Gibbs states that Twitter was considering, let alone be forced, to employ preventive, automated censorship using fuzzy statistical algorithms. This is in no way backed by the original source he's commenting on nor the laws that spawned this in the first place. For instance, while denying the Holocaust is illegal in most of Europe and many other countries across the globe, pre-censorship is usually illegal, in Germany even unconstitutional. Only "post-censorship" (i.e., keeping an existing publication from being distributed after the fact) is, by way of court order, legal -- much like in many other countries including the US.

This and only this way of reacting to illegal content after the fact is what Twitter claims to be able to do in their press release. To be more precise: Twitter was already required to follow the laws in the countries it operates in. I am not aware of a case when this might have previously happened, but if they were required to remove an incendiary tweet previously, they would have to delete it globally due to technical restrictions, not only in the area where a law was being violated -- only now, Twitter will not have to settle for the lowest common denominator anymore. Arguably, that's an improvement.

That said, I am as sensitive to the dangers to freedom of speech as the next guy, and I am a passionate opponent of certain legislation in my home country. Any sort of censorship, whether it may be deemed legitimate or not, is a restriction of free speech and bears the potential for abuse. Consequently, the biggest problem here is not the removal of tweets that directly violate laws protecting the democratic order of certain countries--our biggest worry, instead, should be the Chilling Effect this may cause (Chilling Effect, or "the scissors in the head" as it was termed over a century earlier in the 1840s in Germany, refers to the preemptive self-muting by a person fearing punishment when expressing their opinion). Therefore, I am quite happy that Twitter (along with Google and others) is publishing any block requests it receives on chillingeffects.org, thus exposing such requests to public scrutiny and political discussion.

Yesterday, I read a nice blog post by Alex Clark outlining his experience setting up an instance of Zamboni (the Mozilla Add-ons codebase). The main source of confusion was that Zamboni, like most Django-based Mozilla web applications, uses something we call a vendor library to deploy their third-party library dependencies, as opposed to installing them from PyPI using pip. This is me, reading a Firefox-themed QR Code with my cell phone.

After getting the idea from this excellent blog post, I made a QR code pointing to mozilla.org/firefox, sporting a nice little Firefox logo in the middle.

For the geeks among you who would like the 411, this works because QR codes have a certain degree of redundancy for error correction. The logo in the middle is considered an "error" and thus, the rest of the code is used to puzzle together the information in the code anyway. 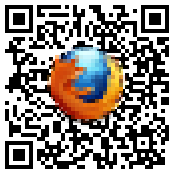 Try it out with your smart phone (on Android, with an app like Barcode Scanner), it really works!

I am a fan of Words with Friends, a Scrabble clone made by Zynga (of FarmVille fame). The app's competitive edge is the availability across platforms (iOS and Android). In the same, cross-platform, spirit, they recently started offering a Facebook app, so people can waste their time not only when they are out and about, but also wherever they have access to a full-blown computer. Unfortunately, clicking on the Words With Friends Facebook app leads to this screen:

My Facebook session is SSL-encrypted by default, but Words with Friends requires me to disable this encryption. This is wrong on many levels. Most notably, if I disable "secure browsing" on Facebook altogether, even only for this session, my session cookie will be sent in plain text over the wire (or worse, on Wifi, over the air). If I do this at a coffee shop or airport, this is a great invitation for every evildoer in the general vicinity to hijack my Facebook account.

I wish Facebook enabled SSL encryption by default, and furthermore required third party apps to be served over SSL. You can't have it both ways: Either you don't handle user data, then you don't need to care about encryption. Or you do handle user data (and yes, a session cookie counts!), then you need to properly secure it. I am tired of software makers weaseling themselves out of their self-imposed responsibility.

Update: As pointed out in the comments, moving to HTTPS for apps is on Facebook's developer roadmap. I appreciate it! Oh no! Yesterday was the first day in 85 days of "Project 365" that I failed to take and post a picture that same day. I blame Minecraft: During the day I was busy, but usually catch up on the photo taking before the end of day. But then I gave Minecraft a shot: It's a fantastic little game about converting a world made of blocks into something awesome (and all the while staying safe from the monsters that come out at night). I like the gameplay and how--in this xbox and PS3-saturated world of ours--it's a game that totally pulls off the 8-bit graphics.

Apologies for the delayed post and I'll try to be on top of it again (unless I get sucked into the game agai......... 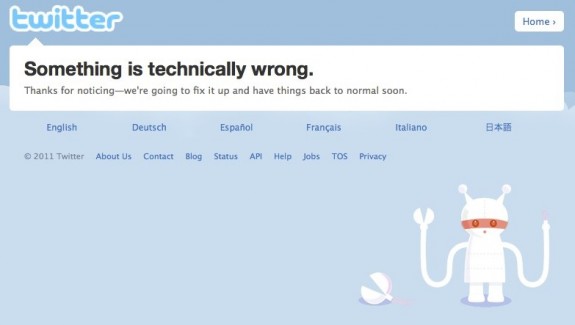