Who ever had the brilliant idea to put the RW logo on every writable DVD kind, no matter if it is actually rewritable or only writable once?

(The DVD+R logo, containing the big letters RW meaning that it is NOT writable more than once.)

I know, there's a de-facto-standard group out there called the DVD+RW alliance. Its well-known members have got together in order to agree on an industry standard for rewritable DVDs. As such, they decided to put an RW into the alliance's logo, and consequently on all licensed products, no matter what kind.

But writing RW in fat letters on once-writable media and only mentioning the actual product properties in fine print, that just sucks. Seriously.

Sorry to say this, but it seems like Apple is doing a pretty good job at curbing the users' joy about new and improved features by the severity of the bugs that have slipped through into the final release. (Don't get me wrong, as I work in the software business I know and understand how hard it is to catch all bugs -- but that doesn't make the remaining ones any more fun ;) )

Some people, including me, experience that their keyboards become unresponsive intermittently, mainly but not exclusively on the Macbook/Pro laptops. This has been described many times on the net, for example by the "Apple Gazette".

For most people, the problem seems to boil down to these key points:

So far, I was unable to find a confirmed solution for the problem, but some readers suggest that the problem has not (yet) reappeared after they reset their NVRAM and PRAM as described in this Apple help document (if your Apple boot sound becomes so loud your neighbor across the street could hear it, you did it right).

Note that this issue was not fixed by the recently released OSX 10.5.1 update (though it fixed a pretty bad data loss issue, so you want to install it).

If you experience the issue too and want to share some thoughts, or if you have other household remedies at hand that may heal "spontaneous keyboard loss", please feel free to leave a comment.

Update: The PRAM reset did not help; after waking up my laptop, I still frequently experience the loss of my keyboard. But as reported in the comments, Apple tech support frequently tells people they know about the problem and they're working on fixing it. Let's hope that's true.

Update 2, 12/19/07: Apple released a software update that is supposed to fix the problem. Please read my followup post.

A few months ago, I bought a 4 GB USB stick and at the time, I didn't know what it meant that it said "(U3)" in the price list behind it. At home, I realized that the stick had some weird partition on it, resulting in a "CD drive" being mounted along with the actual data partition when I plugged it into a Mac or Linux computer.

After short digging, it turns out U3 is a proprietary software made by Sandisk and others intended to allow portable applications on USB drives. This sounds like a good idea, but drawbacks are numerous: For once, it only works on Windows: When you plug in the USB stick, the computer starts working hard and some sort of software called the "Launchpad" is started magically: 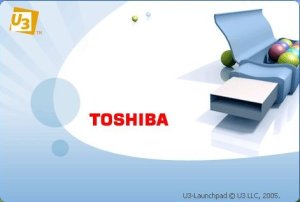 This is not only slow, but I can also see fellow students killing me for messing with their computer when they just wanted to copy a file real quick.

Luckily, I got a hint that the U3 software is uninstallable, making my USB drive decently usable on all platforms as expected: Click yourself through the U3 site, download the uninstaller and if you want to be nice, even tell them why you uninstalled it ("I needed the 6 Megabytes", funny): 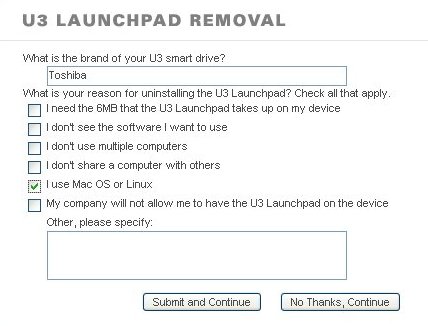 Note though that uninstalling U3 will wipe your entire USB stick, so you better make sure you backup everything valuable before you do this. Afterwards, you and your USB stick can finally live happily ever after. :)

By the way: Quality- and speed-wise, Toshiba USB sticks rock.

Gladly, there are numerous community efforts to bring our tragic hero back on stage. For example, like in OSX 10.4 Tiger, it is possible to deactivate the XTerm window starting up every time you start X11. It has just become a little more complicated.

First, this is what has changed with launching X11 on Leopard (as described on boredzo.org):

In Tiger, when you launch X11, it runs .xinitrc, and .xinitrc runs xterm (unless you comment that line out).

In Leopard, X11.app is just a launcher. All it does is run /usr/bin/login -pf $USER /usr/X11/bin/xterm. In other words, its only purpose is to run xterm (semi-)directly, by itself--it's not the actual X11 server anymore. When xterm starts, launchd sees it, notices that xterm requires X11, and launches the real X11 server (/usr/X11/X11.app) automatically.

In other words, there's no commenting out a line in .xinitrc anymore in Leopard. Instead, we need to change the launcher itself (as described in the very useful X11 on Leopard FAQ on macosxhints):

Instead of xlsclients, we can alternatively run xprop (thanks, JP!). Both applications have the good habit not to do much (i.e. not to waste a lot of cycles/energy/water/CO2/whatever) and also not to open an annoying window like xterm does.

On our neverending bug journey though Leopard land, here we go with the next episode: X11.app in connection with the Gimp.

Apparently, Apple did not find time to test one of the (if I had to guestimate) most used X11 applications on the Mac with their newest version of X11. Therefore, X11 on Leopard crashes frequently with the latest Mac version of the Gimp image editing software.

Also, when you pick, say, the brush tool and move it over an image, the tool pointer sluggishly follows the mouse pointer around until, about 2 seconds later, they meet up again. This looks funny, but makes actually using the Gimp kind of impossible.

Fortunately, the bugs in the shipped version of Leopard can be resolved by installing upgraded versions of libX11 and Xquartz as described on the X.org Wiki. This worked flawlessly for me, but make sure to make a backup of the libraries before you replace them, in case something goes wrong.

By the way: Does anyone know how to remove the XTerm window that always pops up when X11.app starts?

Update: The RC3 version of Gimp from gimp-app.sf.net seems to lead to problems, even after fixing X11 as described above. However, until the gimp-app guys release the stable version (currently: 2.4.1), there is a community build available from Nasendackel (German). Good job!

Still, in order to make popular email clients play well with GMail, they need some tweaking. Most notably, the default "Trash" folder assumed by most email clients will just create a GMail tag named [Imap]/Trash instead of actually putting the email into GMail's trash folder.

Though, the good news is, help is near! Lifehacker has an excellent tutorial on tweaks you can apply to Thunderbird in order to solve this and other problems and make the most out of the Thunderbird+GMail combination.

For the passionate Mac users, Jean Pierre describes how to choose the GMail Trash folder in Apple Mail.

On a side note, choosing a special Trash folder is slightly complicated in Thunderbird (editing about:config is pretty advanced, I'd say). Unfortunately, this contradicts the recommendations on IMAP4 implementation (RFC 2683), section 3.4.8 ("Creating Special-Use Mailboxes"), where it says:

In addition, the client developer should provide a convenient way for the user to select the names for any special-use mailboxes, allowing the user to make these names the same in all clients used and to put them where the user wants them.

For "Sent", "Drafts" and "Templates", this is indeed already very conveniently handled in the account settings dialog, yet for the Trash we need to edit special preferences, which is slightly confusing.

Interestingly, there is already a bug on this (and has been for a while). The good news is: According to one of the comments, this is fixed in the trunk, so we can hope to get this feature with the next major release of Thunderbird. :)

I just noticed that during the last few weeks, through the projects I am working on and classes I am attending now, the number of programming languages I am handling on a daily basis has increased to six:

(Let's not mention the occasional line of Assembler that programming assignments tend to require ;) )

I am excited: More variety spices this all up a little. Though sometimes the drawbacks in the respective languages become all too obvious when only days before you have done the same thing in another language with 2 lines of code and today you need 20 to do it elsewhere. But I guess the motto of the mutt email client does apply to programming languages too: 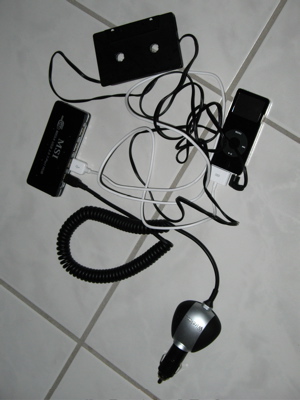 Guess I am getting closer to running a well-usable version of Leopard, but I am not quite there yet: Since yesterday, my Trash turns out to be always shown as "full":

(Yes, Papierkorb is the German word for "paper bin").

So far, I haven't been able to figure out why this happens -- there's nothing in there, really. I even "sudo rm -rf"-deleted the .Trash folder out of my home folder, but it didn't help. OSX did automatically recreate it (empty!) but the dock icon won't change.

For now, I guess I'll have to live with an "overflowing" trash can -- if you have any hints though what else I could do, a comment would be very much appreciated :)

Update: It's fixed! It was a filesystem corruption in the fat32 filesystem. I ran a chkdsk which converted the "undeletable" file into one that I was able to remove. Thanks for pointing me into the right direction, Jean Pierre and Greg!

Find your downloads quickly in one dedicated stack. Downloads from Safari, iChat, and Mail are automatically saved to the Downloads stack. Say goodbye to desktop clutter.

... says Apple's "new feature" description for Mac OS X Leopard. What it doesn't mention is that you can make (almost) any software you like use the "Download Stack".

Fact is, the "Download Stack" just displays the contents of a folder named "Download" in your home directory (which Leopard automatically creates). So, making Firefox use it is fairly simple -- here is how:

Go to the preferences window, into the "Main" tab: 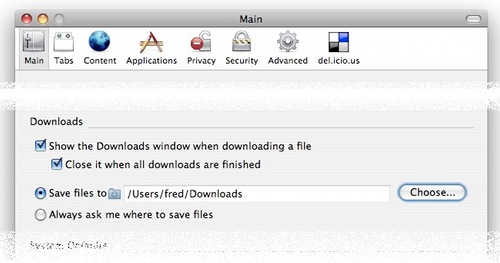 Under "save files to", go to your user folder, then choose the folder named "Downloads".

Save the settings -- and next time you download something off the net, you'll see that it is easily (and instantly) accessible through the neat little "Download Stack" in your dock (in this case my local bus schedule. What a meaningful file name.). 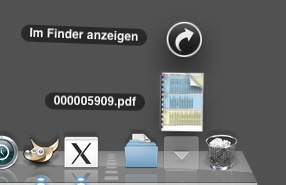