Leaving my wi-fi router in the house when moving out, I am about to put it in a central place and wanted to make sure the reception is decent enough for everybody to enjoy. So I read up on the topic a little bit and found a nice little explanation why 200 milliwatt TX power will not make your access point better, faster, or more awesome than your friend's. No matter how much the average script kiddie wishes it did...

from: Technical Notes and Wi-Fi FAQ

Al Billings has a picture of the blown transformer that caused Thursday's power outage. That laundry truck must have ran into it really bad, considering it ripped it off its base: 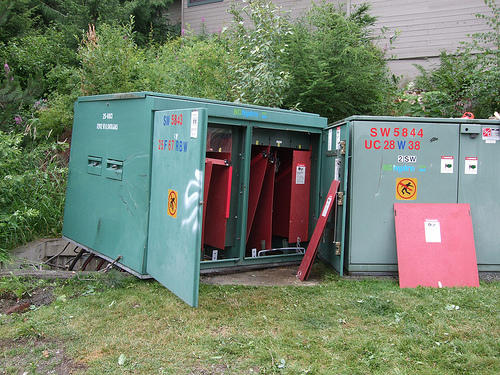 Exactly 75 years ago today, Adolf Hitler was appointed Chancellor by the President of the Weimar Republic, Paul von Hindenburg. This was the start of the Nazi regime and marked the beginning of what would become the darkest chapter in German history.

The very same day, Hitler's SA goons (nicknamed the "brown shirts") started bullying people in the streets and held torchlight processions. In an article in the local paper today, it is mentioned that none of these processions happened in Ettlingen, the fairly little city I live in (which consisted of hardly 10,000 citizens at the time), and in the few remaining elections, the catholic "Zentrum" party still got the majority in the city, in spite of the overwhelming propaganda started by the Nazis. However, that this is a sign of "inner resistance" can be doubted: The same year, 1933, the city awarded Hitler honorary citizenship for his "immortal achievements" for Germany -- something that hardly speaks for neutrality, let alone resistance.

A nice quote (yet, due to his slightly vulgar Berlin dialect, hardly ever officially mentioned) comes from Max Liebermann, a German painter of the time, who was allegedly watching the Nazi procession in Berlin from his apartment, when he said (my translation):

You know, I can hardly eat as much as I'd like to vomit. 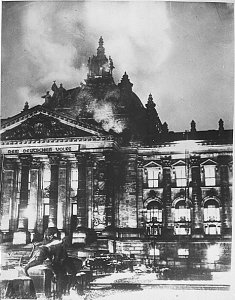 In one month now, on February 27th, it will be the 75 anniversary of the Reichstag fire, an arson attack to the German parliament that the Nazis took as an excuse for their infamous Reichstag Fire Decree, abolishing central constitutional rights in order to suppress any opposition to the regime.

At the time, a Dutch bricklayer was allegedly arrested inside the Reichstag claiming he had set the fire. He was sentenced to death and killed in early 1934. However, he was likely a scapegoat and who actually set the Reichstag on fire remains unclear still today. Only two weeks ago, the death sentence against him was finally officially thrown out by a German judge, on the basis of the violation of "breaches of basic conceptions of justice". At the time of the fire, arsonists could not be sentenced to death in the Weimar Republic; only an emergency decree released after the fact and applied retroactively led to his eventual execution.

As you can see, Germany still hasn't worked through all the remainders of nazism and is still today in the process of "cleaning up" the injustice left by the regime.