Thank you Florida, Kentucky and Missouri, which are the first states which will require drug testing when applying for welfare.

It's a Facebook meme that has been around for a while. Considering it is factually false, it has a surprisingly long half-life.

Normally I just let these things slide, but I subsequently alluded to this post as "mind-numbingly stupid" on Twitter, and besides, I am in the mood for a rant today, so let's dissect this a bit.

I'll leave the legal analysis to people who have studied a lot more law than I have (and in the right country).

But it strikes me as ironic that ultraconservatives, who never grow tired of proclaiming their weariness of the government, would be upset by someone even questioning the constitutionality of a government-imposed measure based on absolutely no "probable cause". That's at best dangerously naïve, at worst deliberately hypocritical.

The author goes on to claim "It's okay to drug-test people who work for their money…" — this false comparison is a particular pet peeve of mine with the American public. It conveys the basic assumption that because I had to go through a negative experience, it must not be fixed for anyone else, ever, in the future. Otherwise that person is a freeloader and a whiner.

An infamous example of this is the "we are the 53 percent" meme, in which people in various kinds of horrible life situations brag about how they work 3 jobs, don't have health insurance, and are somehow still alive enough to boast about it on the Internet. 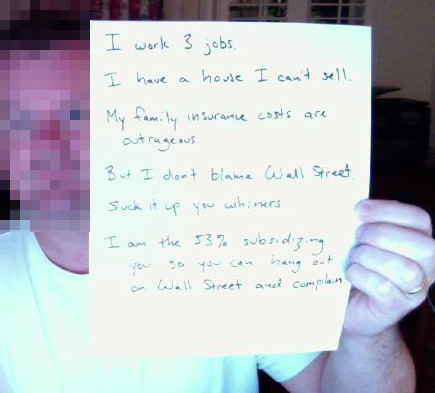 It is one of the most despicable character traits I have encountered on this side of the Big Pond.

Don't get me wrong: I fully agree that you're ultimately responsible for your own choices. But I may never get over the fact that it is more popular in this country to live equally miserable lives (after all if you're miserable that must mean you're not working hard enough) than working together as a society to improve the quality of life for many.

Which leads me to the Ostrich Approach. The meme above mentions "If you can afford to buy drugs and extra illegal things then you can afford your own groceries." Superficially, a splendid idea. Practically, this is suffering from argumentative holes the size of average Mars craters.

As it turns out, no one gets up in the morning thinking "What a beautiful day! Should I be a drug addict today, or should I have a picturebook life instead?" So while the initial decision to take drugs is the individual's own responsibility, just cutting them off their food supply and taking away the roof over their heads is not going to solve the problem. Not for the individual, and not for society (that will then have to deal with a homeless drug addict, probably turning to crime to fuel their addiction). 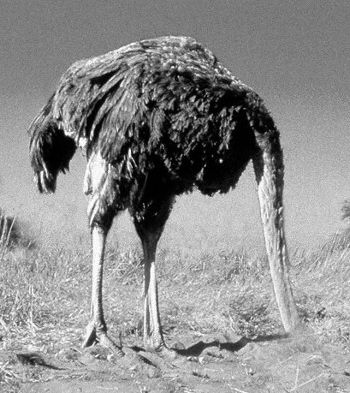 This "ostrich approach" to social policy is another baffling occurence I have observed in the U.S. The solution to "too many homeless people" is a "no loitering" sign. Too much gang activity? Enlarge the prisons. Teenage pregnancies? Pretend young people are asexual until their wedding day, when they flip on that switch.

I marvel at how people can seriously believe that societal issues will go away if only they close their eyes hard enough. I have a hard time deciding if this is just mind-boggling naïveté or malevolent ignorance, or perhaps something in between.

But much like the ostrich, humans must eventually concede that reality catches up with them, no matter how hard they try to ignore it.

On the upside, there's some room for hope. Organizations like ACLU fight hard to keep basic civil rights from being eroded in the name of simplistic populism and dense dive-bar rhethoric. And an ever-increasing number of Americans seem to agree that dog-eat-dog is not the basic fabric that their society should be built out of.

Here's hoping that conviction catches on.

I'm blogging about once a week in 2013, on various topics. This is my fifth post of the year.