Note: Several commenters have provided valuable feedback that I am responding to with updates to this post and in the comments. Make sure to read both!

On yesterday's WWDC keynote, Steve Jobs introduced "FaceTime" and explained its base technologies with the following words: 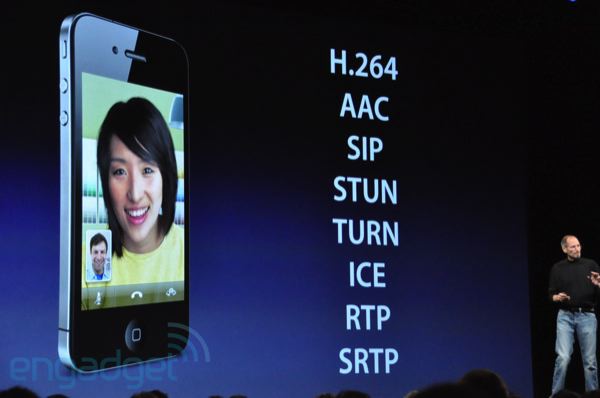 "Now it's based on a handful of standards... but this is going to be an open industry standard."

I wish Steve Jobs would cease calling H.264 and similar standards "open". Technologies that cost millions of dollars to use are, by definition, not open. He can hope it'll become an "industry standard" (as in, used by companies apart from Apple), fair enough. But he can't say it is going to be "open". That's like a college kid calling the grocery store "free" just because daddy gave them an unlimited credit card. And it's doing a huge disservice to the Open standards community by misusing the term in the worst possible way.

Quote and photograph courtesy of Engadget. Thanks!

Update, 4/9/2010: For a while, I removed the above text in order not to express unwarranted criticism towards the speaker. After several rounds of user feedback, however, I decided to keep the original text and update/annotate this post as necessary.

Update on the definition of openness:

As Sandy pointed out in the comments, there are many definition of what standards are considered "open" and depending on which of these you follow, varying licensing fees, as long as you don't exclude anyone with enough money to buy them, are still valid for calling a standard "open". I disagree with that view, but it is a possible interpretation.

Commenter Dave mentions that Steve Jobs usually makes sure to call actual open standards "open" and calls H.264 and similar technologies "industry standards" instead. He is therefore likely to know the difference between the two, even though calling an entire stack "open" in spite of some of its components not matching that definition is a strange, or even misleading, point of view.

Finally, Jo argues that the mere fact that other vendors can build devices to connect to the FaceTime stack instead of it being limited to Apple products only makes it "open". In other words, this use of "open" would be a synonym of "standards compliant". I believe that is still a very limited view on openness, but at least it is more open than the alternative: a locked-down proprietary solution.

Peter also reminds us of the technical limitations: Since all mobile devices need hardware support for video encoding and decoding, Apple had to settle for H.264 a long time ago, and even if they wanted, they could not simply switch over to a different codec. Most people (me included) also seem to agree that H.264 is -- from a purely technical standpoint -- a good choice for the FaceTime stack.