Since a little while I was checking out Zooomr, a young photo sharing site that happened to hand out "pro" accounts to bloggers when they blogged articles with zooomr pictures in them.

After using it for a while, I had stumbled across quite a few things that I didn't like, were missing, or simply too hard to do. While zooomr is still beta (and the reason to give away the accounts as mentioned above is clearly because it is not in its final development stage), I felt inclined to try out its "big brother" flickr as well, because up until now, the Yahoo company is, after all, setting the standards which zooomr tries to compete with.

So I bought myself a one-year pro account for flickr in order to be able to compare the two.

A word about the general appearance and features of the sites: Both of the sites are quick, pretty simple to navigate and offer similar things to their pro account owners. They come with quite a few RSS feeds in different places and allow you to tag your photos and publish them under a Creative Commons License, if you want. They also look pretty similar. I don't see many qualities here that would make one significantly better than the other.

Zooomr has a very nice set feature called "smart sets" that creates photo sets based on distinctive criteria such as tags, date taken or owner. These sets are theoretically able to update themselves, so if I want to keep all my "fun" photos in one ever-growing set or all pictures which happen to show me, I can easily do so.

Flickr instead only knows static sets which -- while they can be filled with well-filtered image results -- won't grow on their owns. Also, flickr sets can't contain other people's photos as well (which smart sets will, unless I filter for myself as the owner).

The better set feature is in my opinion almost clearly zooomr's smart sets. Unfortunately at the moment, the feature has a few implementation problems: I frequently encountered empty sets when I filtered for, apparently, too "popular" tags (like "fun"), and sometimes not all pictures I was expecting to show up actually appeared in the set. Also, I am unable to group, say, 3 seemingly unrelated pictures in a picture set, if they don't have distinctive features I can select them with, since Zooomr doesn't support manually created/refined sets yet. But once that is cleaned up and fine tuned, the smart sets will be a really nice and powerful feature.

This point almost immediately goes to flickr: While Zooomr simply has no possibilty to sort pictures in sets, bulk edit them, or even delete several of them at once (at least none I could find), Flickr comes with a fabulous tool called "Organizr" which contains an armada of options to sort, edit, tag, or even delete batches of pictures and also to edit their access permissions and picture licenses. On zooomr, I even searched in vain for a preference setting to choose your default picture license, let alone chanigng it for a bunch of pictures after they were uploaded: You had to do it one by one.

Flickr, after their Yahoo buyout admittedly with many more resources than any startup could possibly have on their owns, has, for the most part, understood what users need to conveniently organize and share their private pictures online. They make juggling with sets of dozens of pictures easy, quick, and through their intensive, yet unobtrusive, use of DHTML, making your pictures appear on the internet the way you want has become as intuitive as never before.

Zooomr, however, still looks quite promising and they are on the right track: With much less resources they managed to make a tool that is almost able to compete with what flickr has today, and if they keep on fixing the bugs and improving their beta software, they can become a serious competitor. However, they need to make sure that they stress features that distinguish them from every other photo sharing website out there, with cool features like their smart sets or similar. Just doing the same everybody else does will not keep them over water in the long run. And while being cheaper than flickr (which currently sell their services for 25 dollars a year) can be an additional argument, it is unlikely that saving 2 to 5 dollars or so a year will by itself convince new customers to decide for them, let alone convince existing flickr users to switch.

After all, don't underestimate the "but all of my friends have flickr!" and "but I have all my pictures there already!" effects (in economics, we speak of network effects and, after you dump a few hundred pictures at one site, a form of lock-in).

Hello again and greetings from MacWorld 2007 in San Francisco!

To be exact, from the Microsoft Blogger Lounge. That sounds strange, but it's true ;) And while the upcoming (?) Microsoft Office 2008 ranks pretty high on my (ever-growing) list of things I could not care less about, the whole blogger lounge thing is a pretty nice move. But then again, it seems kind of lame that they just offer wired Internet: That's about as lame (or 1992, or web 1.0, you name it) as it gets. Here are some pics:

Macworld is an interesting type of expo. Almost every single booth offers something you can attach to your iPod, or software you can run on your Mac, or more or less useful things you probably never really need, but people buy anyway. <!--more--> By the way: While Steve Jobs deliberately ignored the whole "software" topic in his keynote on Monday, he leaves this job to his employees, presenting key features of Mac OS X 10.5 on one of the two gigantic screens that form the center of the whole expo floor. On the other one, by the way, some nameless Apple person also played with an iPhone, with lots of curious Mac users listening.

However the actual star of this year, in my opinion is the Apple TV which -- and I am not sure why -- gets quite a bit less attention from the visitors than the iPhone (even though the latter is hidden behind glass). But judging from what I see on the neat HDTV screens they are showing off...

... the Apple TV could really be an enhancement for my living room. Also, it doesn't seem to be as ridiculously overpriced as the iPhone.

Feel free to browse through my other Macworld pictures as well. 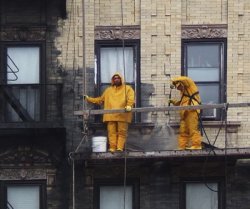